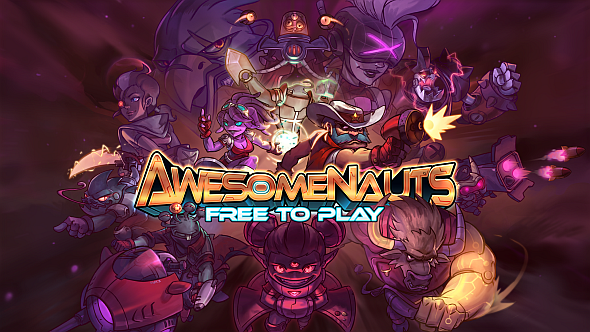 Update 25 May, 2017: Awesomenauts is now free-to-play on Steam. The 2D sidescrolling MOBA has had a closed beta version of the free-to-play model up for about a month now, stress testing the new features and economy as the game transitions.

Check out the competition in our list of the best free games on PC.

Awesomenauts currently has 29 playable characters, various game modes, and even a map editor. Players can dip in for free or purchase a copy of the game to get access to all of the characters.

Original story 26 April 2017:Cartoony MOBA-platformer and cult indie hit Awesomenauts is getting a big update today, set to pave the way for a shift to free-to-play on May 24. All existing players will get to test the changes in a beta when the update hits.

The new-look Awesomenauts will feature:

Real money is still the only way to buy character skins, but can now also be used to buy individual playable characters (as in most full-blooded MOBAs) and drop-pods.

Developers Ronimo say nobody will lose anything during the transition. Existing players will have all the content they previously owned unlocked, and, as an additional ‘thank-you’, if you’ve registered Awesomenauts on Steam before today, you’ll be granted ‘founder’ status, and receive a unique medal in the brave new world. Here’s a handy chart to clarify what you’ll get based on what you own now: 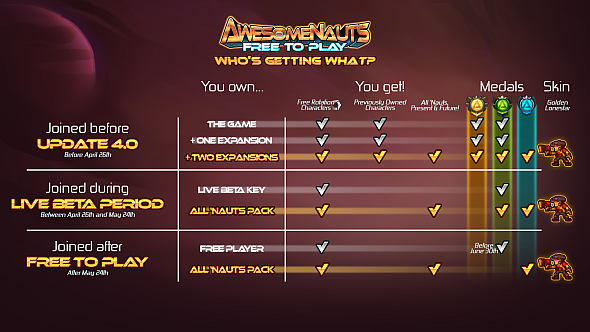 As you can see, if you own Awesomenauts and both its expansions (Starstorm and Overdrive) before the move on May 24, you’ll be automatically upgraded to the new ‘Awesomenauts All Nauts Pack’, which grants all playable characters for free, forever (other players can also buy the All Nauts pack at any time).

The live beta for the new Awesomenauts launches later today – at 17:00 BST, or 09:00 PST. Then, on Wednesday May 24, the game will officially relaunch as a free-to-play title.

If you didn’t know, Awesomenauts is a 3v3 multiplayer action platformer. Set in the year 3587, you’ll pick from a cast of zany sci-fi characters and do battle with your enemies on a colourful 2D map. It bills itself as an accessible MOBA, like a MOBA-lite. Diet MOBA.

Anyway, it’s pretty successful, having welcomed over two million players to its community since its launch in August 2012. It’son Steam here and, at £6.99 ($9.99), it’s pretty cheap even without free-to-play.