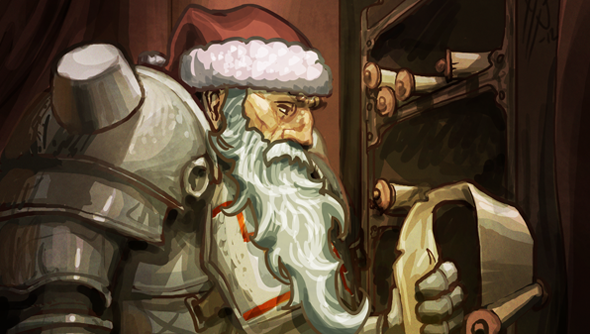 I see you’ve got some Scrolls there. How about some more? Reams and reams of Scrolls, flying off the holder like toilet paper in an Indian restaurant, practically mummifying you. Would you like that?

Alternatively, you could offer some of that extra Scrolls to a friend. “It’s the most Christmassy time of the year!,” exclaim Mojang. “There is no catch!”

There is a catch of sorts, though it’s hardly unreasonable – you’ll want to own a copy of the game first before you can gift one.

After that, you’ll want to log into your Mojang account – the place you usually fiddle with Twitch settings for Minecraft and such – and click at the catchy ‘Send to a friend’ motif. Enter an email address in the box, and that’s where your free extra copy will go.

On the other end, your friend (though Mojang will also allow family, acquaintances and dire enemies) will receive a code and some simple instructions on how to redeem it.

Entice that friend into installing Scrolls via some of the exciting new features that await them in patch 0.112.1. Like: fixes for achievements not being properly rewarded! And: a change in HP for the Frostbeard card!

Sorry: I’m trying to be facetious while I’m still young. There’s no denying that incremental patches sound a tad tedious to the outsider – but Scrolls is by all accounts shaping up to be a compelling and distinct tactical CCG that can comfortably sit alongside the likes of Hearthstone and Card Hunter without being shaken down for its lunch money.

How’ve you lot found it?