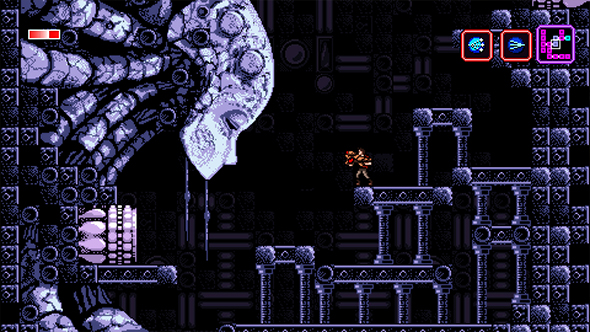 The wonderfully dark world of Metroid-alike Axiom Verge is entirely the work of Tom Happ. A Petroglpyh developer who worked on titles like Grey Goo, Happ began development of Axiom Verge in his spare time, and by the time of the game’s 2015 release he was still the sole developer. That makes it a fairly personal game, and its success is helping with an even more personal cause.

A new physical release has been published by BadLand Games, and they’re donating 75% percent of their share of the proceeds to ongoing healthcare costs for Happ’s son, Alastair. The boy was born healthy, but doctors failed to treat a routine case of jaundice which led to Alastair developing a neurological condition called kernicterus. It’s a lifelong condition that requires constant treatment from a variety of doctors and therapists, and that treatment is now being funded through the latest release of Axiom Verge.

“After we decided to move forward with BadLand Games as the publisher,” says Happ in a blog post, “they offered to donate 75% of their share to a special fund dedicated to Alastair’s ongoing health care costs. They didn’t want to publicize it, since none of us wanted to be seen as trying to use my son’s suffering as a marketing tool for the game. I hope this doesn’t come off that way. I just wanted to thank them for their generosity in offering that up, since it was definitely something they didn’t have to do.”

That’s 75% of the recent physical release of the game, but since the digital editions were self-published by Happ those profits are certainly made to the same benefit. I already had plenty of affection for Axiom Verge – it’s one of the best Metroidvanias I’ve ever played – and this only serves to make that admiration deeper. If you haven’t checked it out, you should, and it’s currently half off as part of the currentSteam sale.