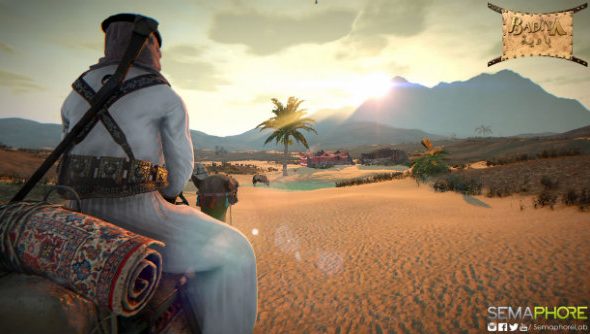 There’s been a real lack of open-world, Early Access survival sims at this year’s E3, but there was at least one and, honestly, it looks really interesting.

One of the things that makes Badiya interesting is the studio behind it, the Saudi-based Semaphore Lab. Not only is the studio from the Middle-East, but that’s also where the game’s set, which obviously bleeds into everything else.

There will be camels, for a start. Camels and horses. And tanks. Planes, too. That’s because this is set just after the end of the first world war.

Though it’s procedurally-generated, the environment will be littered with points of interest: military bases, camps, ancient ruins, and the open ocean will feature. You can even build your own ship and head out to sea, sailing between islands and diving down into the depths.

Early Access is coming late this summer and the game will be available in Arabic and English. It’ll enter Early Access in single-player-only, but co-op and multiplayer are coming later.

For the full lowdown, head to the official site.