Baldur’s Gate III will use turn-based combat system. There is, however, one big difference from developer Larian’s previous game, Divinity: Original Sin 2: turns are taken by parties, not by characters.

In other words, all enemy characters and all player characters act together, rather than every character in the battle acting sequentially. As with Dungeons & Dragons, there is a roll for initiative at the start of every combat, which will determine which party acts first.

“Combat works on a simultaneous turn-based method, which basically means it was their turn, it’s now my turn,” as Larian CEO and game director Swen Vincke put it in a press demo. “This is a change that we did to the system which leads to quite a lot of gameplay opportunities. It lets us do quite big battles, as you will see later,” Vincke continued.

We saw the combat system in action as Vincke took on a trio of Intellect Devourers. If you want the short version, it’s D&D fifth edition in almost every particular. All characters can use a set of universal actions inspired by or explicitly based on the D&D rules, including but not limited to:

There were a few more universal actions we didn’t see used, but you can puzzle them out yourself by comparing the eight brown icons in the UI below and comparing them with D&D’s common actions in combat. 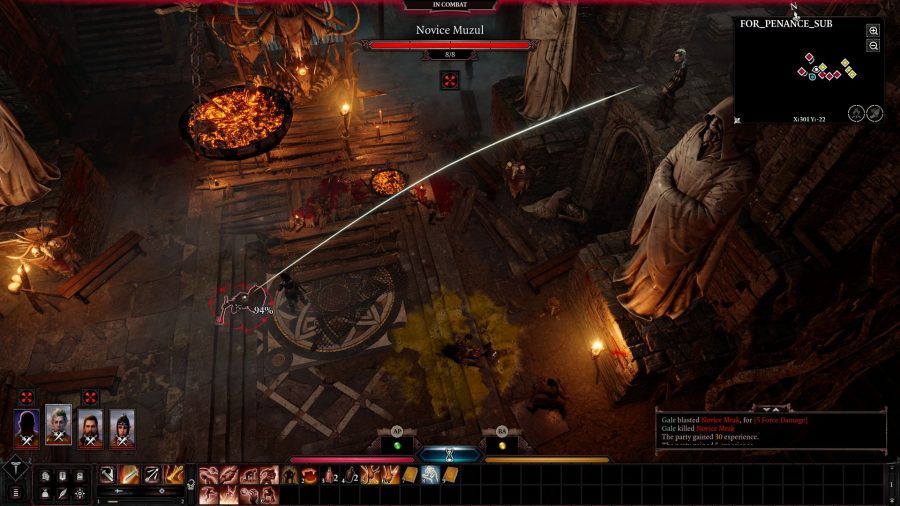 As in D&D, some actions are ‘bonus’ actions (meaning you can do them as well as normal actions during your turn), there are free reactions and attacks of opportunity, and characters have to hold concentration to maintain spells that require it. As hinted, higher ground will confer ‘advantage’ when attacking. In D&D this means you get to roll your attack die twice, but in BG3 this will simply translate into “a better chance to hit”, says Vincke.

Larian is bringing plenty that you’ll recognise from DOS2 – there were plenty of surface-based shenanigans. Vincke throws a bottle of grease to create a puddle of difficult terrain, which has a chance to send enemies slipping to the floor with every step (the Intellect Devourers remain stubbornly sure-footed). Grease is also flammable, as we see later when Vincke’s main character burns to death in a dungeon after a trap pumps it all over the floor.