Following the long list of complaints of Rocksteady’s Batman: Arkham Knight on PC, publisher Warner Bros. has chosen to suspend all sales, until they can update and fix the performance issues, and more.

“We want to do whatever we can to make the experience better for PC players overall.”

Update: the game is now delisted from Steam, with a “Fall 2015” release window.

“We want to apologize to those of you who are experiencing performance issues with Batman: Arkham Knight on PC.” said community admin Yorick. “We take these issues very seriously and have therefore decided to suspend future game sales of the PC version while we work to address these issues to satisfy our quality standards. We greatly value our customers and know that while there are a significant amount of players who are enjoying the game on PC, we want to do whatever we can to make the experience better for PC players overall.

“Thank you to those players who have already given valuable feedback. We are continuously monitoring all threads posted in the Official Batman: Arkham Knight Community and Steam forums, as well as any issues logged with our Customer Support (support.wbgames.com). If you purchased your copy of the game and are not satisfied with your experience, then we ask for your patience while these issues are resolved. If desired, you can request a refund at help.steampowered.com (Steam refund policies can be found here: http://store.steampowered.com/steam_refunds) or the retail location where you purchased the game.

“The Batman: Arkham fans have continually supported the franchise to its current height of success, and we want to thank you for your patience as we work to deliver an updated version of Batman: Arkham Knight on PC so you can all enjoy the final chapter of the Batman: Arkham series as it was meant to be played.” 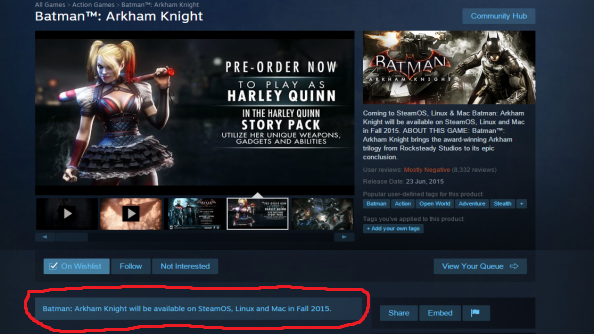 Currently, there are no dates as to when Warner Bros. will resume PC sales of the game. Strangely however, at the time of writing, the game is still available on the Steam store

Update: the game is now delisted on Steam, and says that the game is expected to be released in “Fall 2015”. It’s unsure if this is just placeholder, or a window set by Warner Bros. for its return.

The release of Batman: Arkham Knight on PC earlier this week has been met with criticism of poor performance, bugs and missing graphical features. Things were so bad for users with AMD graphics cards, that the minimum specs for AMD cards was raised right after release.

Did you pick up Batman: Arkham Knight – how’s your performance, and have you requested a refund? Let us know in the comments below.