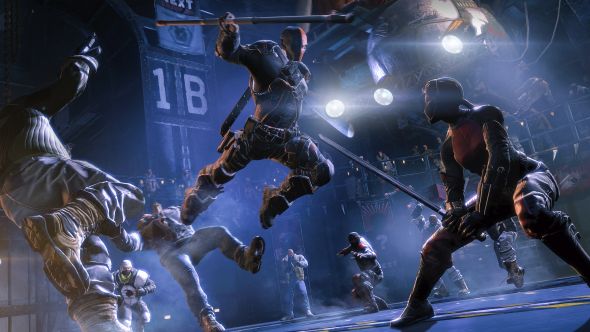 Warner Bros Montreal have cancelled a rumoured Suicide Squad game, and will instead focus entirely on a Batman game starring the Dark Knight’s son and current Robin, Damian Wayne.

Did you enjoy the Arkham games? Here are some of the best sandbox games on PC to play around in.

The news comes via Kotaku, who cite sources inside WB Montreal. The decision to scrap Suicide Squad – which would have been a co-op game and had apparently been in development for two years – was taken after it failed to impress executives.

In an apparently ill-advised imitation of the Marvel movies, Suicide Squad was teased in a post-credits scene at the end of WB Montreal’s last game, 2013’s Batman: Arkham Origins. Here’s a video, courtesy of RabidRetrospectGames on YouTube.

Damian Wayne is Batman’s son by antiheroine Talia al Ghul, daughter of badass bad guy Ra’s al Ghul. Damian was raised in his grandfather’s organisation, the League of Assassins, and is delivered to Batman as a violent and self-important ten-year old who is comfortable with killing. After the most traumatic stretch of father-son bonding in history, during which two incredibly talented humans test their ideologies against one another, Damian takes the mantle of Robin, Batman’s sidekick.

There are some great stories about Damian Wayne, so if this is true and WB Montreal do a good job, we could be in for a treat.

{"schema":{"page":{"content":{"headline":"Batman’s son, Damian Wayne, could be getting his own game after Suicide Squad is canned","type":"news","category":"batman-arkham-origins"},"user":{"loginstatus":false},"game":{"publisher":"Warner Bros. Interactive Entertainment","genre":"","title":"Batman: Arkham Origins","genres":[]}}}}