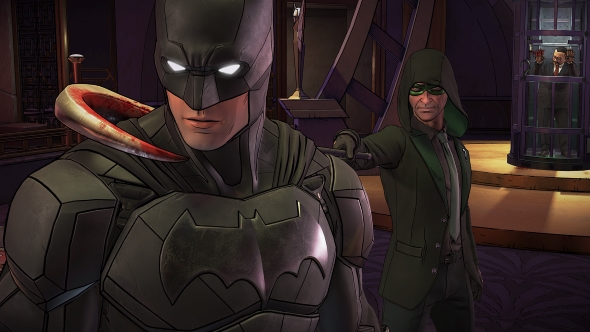 If you’ve played Telltale’s Batman series, the key thing you’ll have noticed is that it doesn’t  feature the same Batman you might’ve read or watched before. There are many things about Telltale’s take on the Batman universe that are very different to other interpretations – from Bruce Wayne’s heritage, to the origin stories, and even physical stature of his rogues gallery. DC allowed Telltale to make whatever changes they wanted, a level of freedom that the developers say they were “humbled” to be granted.

Make the right choices by playing the best adventure games on PC.

Chatting with us at Gamescom 2017, Telltale’s head of creative communications Job Stauffer tells us: “That was hard earned. We’re honored and humbled.”

He goes on to explain that this isn’t out of the ordinary, though. “There are a lot of Batman games, cartoons, comics, and movies, and they all kind of have their own take on things. I think [DC] really wanted to see what Telltale could do, especially in interactive narrative where players control the story.”

The publishing house placed very little restriction on Telltale, and Stauffer notes that there wasn’t an idea that was rejected. “There’s very little that we will come up with that Warner and DC will say ‘you know what, no, don’t do that, because that’s not who this character is’. They feel very strongly about Telltale creating our own canon.”

As an example, Stauffer uses the studio’s take on Oswald Cobblepot. “As long as it feels like it makes sense and it still feels like what this character is figuratively. For example, Penguin last season. Everyone thinks Penguin needs to be four foot tall, 300lbs, crooked nose, webbed fingers, something like that. But for us he’s six feet two and a technophile, but he also comes from a broken background. Every different take we have on the Batman-verse that is new still makes sense, and I think you’re going to see some of that unfold with Harley Quinn.”

Harley, along with the Joker, will be major presences in the currently unfolding second season of Batman. It’ll certainly be interesting to see what new places Telltale take them to. Hopefully a place far, far away from their depiction in the Suicide Squad movie…