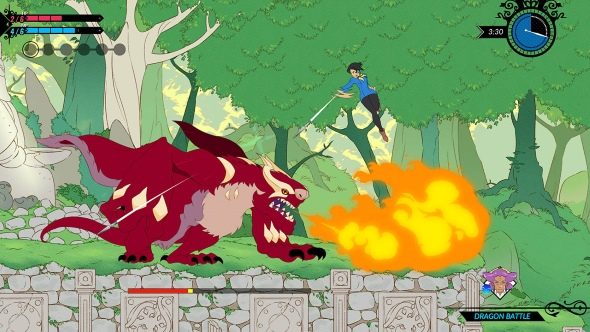 Cooking is an art underappreciated in games. Sure, just about every open-world game now lets you Use Meat on Fire to make something a little more effective for healing, but that’s not cooking. There’s no soul to it.

Batle Chef Brigade is a game about making fantastic food. And by that, I mean dragon steaks, seared and seasoned to perfection. Take a look at the appetising trailer within.

Battle Chef Brigade is joining a heated competition on PC. Think it’ll serve up a beatdown on any of these recent greats?

I must admit I’ve been looking forward to trying Battle Chef Brigade ever since the very first concept animations sizzled onto social media a few years ago. It’s an exciting mix of elements that reminds me fondly both of my own traditional training as a chef (long story), and my love of Cooking Adventure manga such as Toriko and Delicious In Dungeon.

You should really read Delicious In Dungeon. It’s published in English now, too.

Anyhow, Battle Chef Brigade looks to be a game of two halves, presented as an Iron Chef style cooking competition. A panel of judges awaits a five-star dinner, and it’s up to you to pick a key ingredient, rush out into the wilds to carve it out of a hide of some massive monster through a stylish combat system, then run back to the kitchen to assemble a three-course meal in the form of a multi-lane puzzle game.

Doesn’t hurt that it all looks gorgeously hand-drawn too. From the slick and characterful animation, to the perfectly over-detailed food shots (it should be illegal for meat – however magical – to glisten that much), it’s just plain nice to look at, and I’m excited to see whether it can keep up the good looks all the way to the end, and if the two playable protagonists – Mina the human and Thrash the orc – are equally charming.

Battle Chef Brigade is out on Steam in 8 days, as well as Humble and other major stores – Monday, November 20th – although there’s no price-tag on it yet.