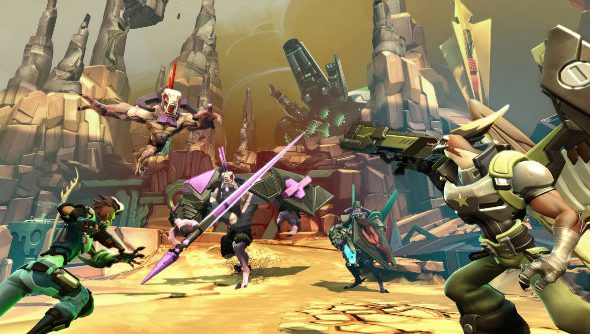 The rivalry between Blizzard and Gearbox’s hero shooters seems to be heating up, with Battleborn seing its price slashed by $20 in a promotion on Overwatch’s launch day.

Sometimes competition is healthy. Without it, we wouldn’t have this list of best multiplayer games.

One of the only criticisms I’ve seen floating about for Overwatch online is that it’s too expensive for a multiplayer-only game with 12 maps.

Battleborn – which boasts a single-player campaign that’s playable in co-op, as well as competitive multiplayer – looks to take advantage of this by cutting its price temporarily.

It can’t be coincidental that this price cut happened on the day Blizzard’s shooter launched, especially as Battleborn has only been out for three short weeks. It certainly seems like part of a strategy.

Battleborn also introduced a new hero, Alani, that very same day, and Gearbox have also been teasing a new hero that will release in the “next couple of months”. Pendles, as he’s called, is a dual katana-wielding trouser snake – he’s a snake who wears trousers and he’s coming to stab you up.

If you want to get Battleborn at its cut price of $39.99, you can do so on the 2K store between now and Saturday.