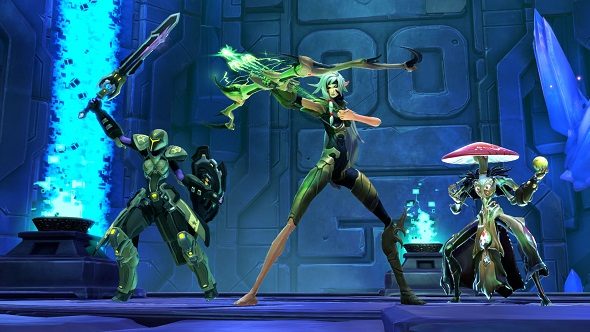 Battleborn seems to be doubling down on its new free-to-play model by introducing a PVP mode that is available to all players. Called Supercharge, it mixes elements of previous competitive game types with some brand new maps.

Competitive players should check out our list of the best PC multiplayer games.

Supercharge is a combination of the Meltdown and Capture game modes, with players fighting over specific capture points to ‘supercharge’ their minion waves. These supercharged minions are much tougher and will gain your team more points if they reach their goal, so controlling those capture points is key to success.

Rather than your typical 5v5 modes, Supercharge is 3v3 so you’ll have to really work with your team to ensure that your minions get to their destination. Three new maps have been specially created for Supercharge – Ziggurat, Permafrost, and Horizon – and they’re a bit smaller than your traditional Battleborn arena to account for the lower team size.

Along with the new maps, Gearbox have introduced Supercharge-specific challenges so players can earn more titles, XP, and Credits. If you want tips on how to do well in this new game mode, some of the Battleborn devs have offered some pointers over on their official website.

For those who have yet to try Battleborn, its ‘free trial’ gives you access to all of its maps and competitive game modes. You still have to unlock its heroes and its story campaign with either in-game or premium currency, which makes it similar to most free-to-play titles like League of Legends or Smite.