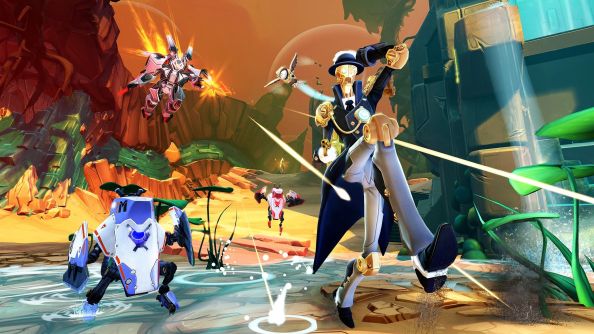 Zany, meme-tastic, fourth-wall-flirting comedy – love it or hate it, Gearbox have certainly developed a writing style all of their own. Which is all the more remarkable since they haven’t had a consistent voice – Borderlands scribe Anthony Burch left last year, and now Battleborn lead writer Aaron Linde has packed his bags.

Into your co-op games? Here’s a breakdown of the best.

Eyewitnesses were unable to confirm whether he slung his personal items over his shoulder with a quip and wink to camera, or whether the letters ‘AARON LINDE – THE WRITER’ were emblazoned across the screen during a suspended freeze frame.

Linde announced his departure on Friday.

Got some news, fellas! Tomorrow’s my last day at Gearbox. Absolutely love this team and am incredibly proud of the work we did together.

Gonna be hauling back up to the pacific northwest in a week or so for an awesome opportunity I’ll talk more about soon. Ch-ch-changes ~

Linde has hopped between game writing roles over the past half a decade – working as a narrative design consultant on Middle-earth: Shadow of Mordor, a lore and script assistant on Gears of War 3, and contributing to an unnamed project at Murdered: Soul Suspect’s Airtight Games before their closure.

Battleborn came out in early May, though between Doom and Overwatch you might have missed it. Gearbox pitched theBattleborn campaign as an interactive, episodic TV show – did any of you lot get stuck in for long enough to find out whether that worked?