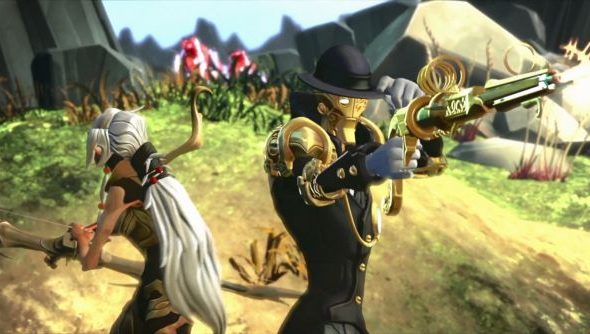 There’s a nice ambiguity to the word Battleborn – excuse me, slickly-animated FPS avatar, but were you delivered as a newborn right onto the battlefield, or do you simply consider it the site of your spiritual rebirth as a true warrior? Ambiguity is good, because we haven’t had much else to mull over in regard to Gearbox’s MOBA-y new shooter.

The Borderlands studio have kept their feature-set closely guarded – but Take-Two have let slip a couple of details about the arena FPS, with the promise of more to come at E3.

The publishers have announced their intention to drip feed information about Battleborn in the run-up to the noisy LA expo, before opening the sluice gates to drown attending members of the press in facts during the event itself.

“Next month, Battleborn will be at E3 in a big way,” Take-Two president Karl Slatoff told investors during a recent earnings call. “And we will have more news to share about the title prior to the show.”

Slatoff mentioned, too, that Battleborn will feature an “accelerated character growth system”; the idea seemingly being that players won’t be tied down to one class forever. Instead, they’ll get to “fully experience” each of the game’s heroes.

On the other hand, Gearbox’s Randy Pitchford has previously described Battleborn’s five-player co-op campaign as “hobby-grade”, and boasting the multiplayer’s potential for eSports and competitive meta.

Players will fight in first-person around creep-like robots in deserts and jungles, in modes evocative of LoL and Dota.

Although Gearbox have said they’re ready to start work on a Borderlands 3, they’ve lately lost Borderlands creator Matthew Armstrong and writer Anthony Burch, who contributed much of the series’ irreverent style.

In the meantime we can look to Battleborn, which is due to appear on PC before April 2016. Is the MOBAFPS a genre you’d like to see coined?