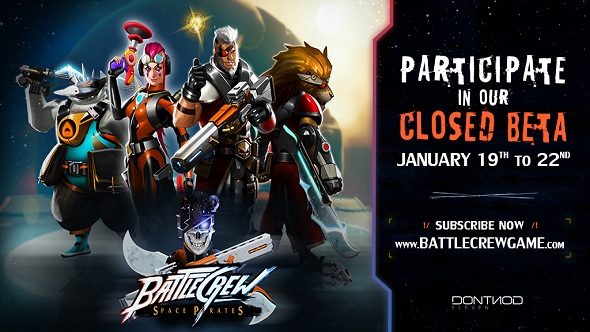 Acting as the sister studio to the developers of Life is Strange and the upcoming Vampyr, Dontnod Eleven have announced the dates for the upcoming closed beta of multiplayer platform shooter, Battlecrew Space Pirates.

If you want more time in the great beyond, check out the PC’s best space games.

Rather than tackling strange lives or androids with bad memories, Battlecrew Space Pirates eschews the story for having aliens, space brigands and bounty hunters blasting the hell out of each other on a variety of different planets and space stations. Rather than your typical third or first person shooter, the game is set on a 2D plane, with cosmic buccaneers jumping, slashing and dashing through each other as they try to get the top score.

The main draw of this closed beta is the ability to squad up with friends, creating your own pirate bands to raid out in space. There are five playable maps for this closed beta, with the playable game modes being Gold Rush, a 4v4 rush to collect as much booty as possible and a 2v2 Team Deathmatch. With four different character classes, a ton of player customisation like new taunts and skins and the ability to play as a humanoid shark with a laser sword, this online brawler is certainly worth a look.

The North American and European closed beta for Battlecrew Space Pirates begins next weekend on January 19, running until January 22. You can check out the trailer above to get a feel for the tone and style that Dontnod Eleven are going for with their foray into the world of competitive multiplayer. There are limited spots in the beta so get signed up on the official website if you’re at all tempted by this bombastic space shooter.