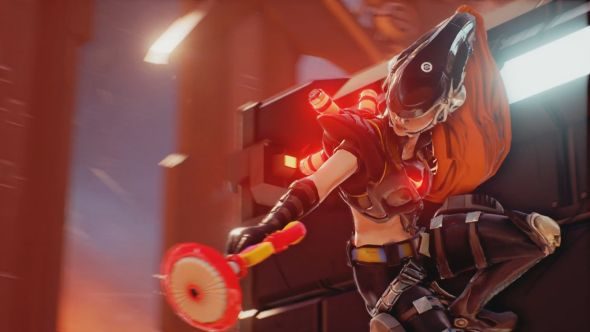 John Trigger. That’s the name of the protagonist for the first game to be put out by the Dontnod brand after Life is Strange. Battlecrew Space Pirates, to give the game its full title, is being developed by Dontnod Eleven, a studio the popular adventure game makers have allied themselves with and lent their name to. It’s coming to Early Access soon and features a hammerhead shark with a giant sword as one of the playable characters, so you know I’m in.

Read more: the best games you can play on PC from independent studios.

Here’s what it looks like, including the protagonist who, as I think I’ve mentioned, is called John Trigger.

John Trigger (protagonist) aside, it’s designed to be fast paced, accessible, competitive and deep. They manage to avoid using the word ‘eSport’ anywhere on the Steam page, but clearly they want that level of skill ceiling and dedication from the best players.

DontnodEleven were previously He Saw, whose only other entry on Steam is Blue Estate The Game a rail shooter based on a graphic novel which I found was a bad idea to google while at work. It’s got a 93% approval rate from player reviews, but I’m reliably informed that it’s not very good, so your mileage may vary. It’s got guns in it, that much is for sure.

BattlecrewSpace Pirates, which I feel would be better stylised in all caps to really push the message home, will be in early access “soon” and debuted properly at Gamescom. Here’s the official site if you want to read a bit more about it.