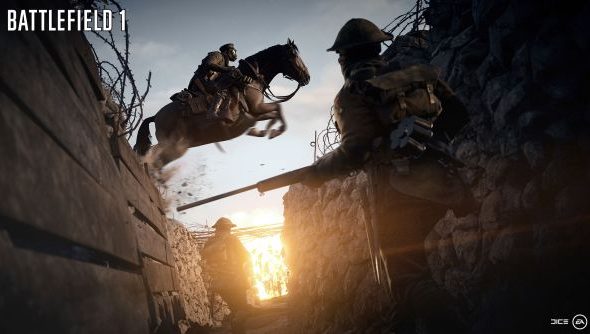 Battlefield 1 is about to get its world premier gameplay stream, showing off a 64 player online battle in all its glory.

For more on the WW1 shooter, check out our Battlefield 1 preview.

While you’re watching that, here are a bunch of new details from the event:

Battlefield 1 looks to double down on destruction and add in dynamic weather to make sure every battle feels different from the last. Hopefully ‘intuitive destruction’, as EA are calling it, brings back some of the more freeform demolition from the Bad Company 2 days. Who needs doors, right?

According to EA, the dynamic weather will force you to adapt your tactics to suit the conditions. Good luck sniping with the sun in your eyes or a blanket of fog hanging over the map. On top of this, Battlefield 1 will introduce a new multiplayer mode called Operations, which lets you play interconnected battles across multiple fronts, with actions of matches impacting the following battles.

If you find yourself pushes back in Operations and you need to win the next match to retake territory, you can call in one of the Behemoths – “the largest fully player-controlled vehicles ever seen in Battlefield”. These will include the Armored Train, Air Ship, or the Battleship.

“With Battlefield 1 we’re looking to deliver the most dynamic shooter ever. We want to make sure that no battle is ever the same for the players, and with the introduction of Operations, we’re giving the fans variety for game play and creativity,” said Aleksander Grøndal, Senior Producer at DICE. “Plus, with the new Behemoths, only in Battlefield 1 can you bring an Air Ship to a dogfight.”

The Battlefield 1 open beta will be live later this summer, but early access is possible for those who sign up to be a Battlefield Insider, which also unlocks exclusive in-game rewards.

Battlefield 1 will launch on October 21, 2016. Players who pre-order the Early Enlister Deluxe Edition can begin playing on October 18.