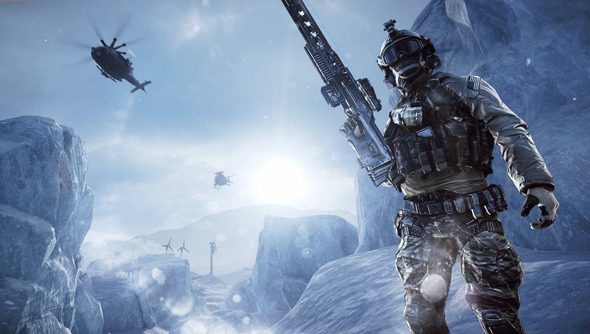 With another Hunger Games on the horizon and no new Crysis sequel in sight, it’s up to DICE to cater to our primeval bow-and-arrow needs. A recent Battlelog update suggests they’ve obliged with a brand new compound bow for Battlefield 4. Named in the code as the ‘Spyder’, the weapon comes with a range of colourful ammunition for exploding, illuminating or making small holes in your prey.

Details uncovered by Battlelog data-diggers reveal that the spyder will function more or less identically to its Battlefield 3 equivalent, introduced in Aftermath with a silly name: the XBOW.

Players will have access to several different bolt types. The spotter will detect enemy movement within a narrow cone and record it on the minimap; broadheads balance range and damage; the sniper bolt sacrifices damage for weight reduction; and a small explosive bolt will detonate on impact.

The only real mystery is the ‘stabiliser’, which reportedly reduces hand shock, noise and vibration. To what effect? Nobody’s really sure.

It’s not yet clear whether the bow will be a primary weapon, secondary weapon or piece of equipment – but it’ll probably be unlocked as the fourth stage in players’ Phantom assignments.

Battlefield 4’s Final Stand DLC is Battlefield 2142-themed, so players are expecting more surprises besides the bow – though DICE won’t tell us when to expect them. What’re you hoping for?