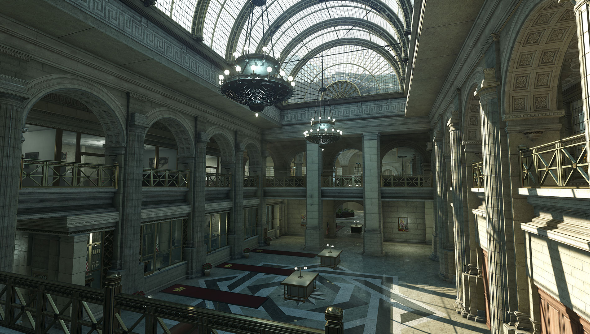 Well yeah, he would be, wouldn’t he?

We are being courted. Oh my, teehee.

In a short blog post, the developer extolls the virtues of playing the next shooty man game on PC, while also reassuring fans that yes, Hardline is honestly, truly the next Battlefield game.

Glosecki is at pains to stress the Battlefield series’ roots on PC, before running the gamut of the usual push-button, PC gamer-pleasing features. Above 1080p resolutions? They’ve got ’em. Better textures than the console versions? Yep. Adjustable field of view? Oh you’d better believe it. 60fps cap? No way José, not round these parts. Get outta town ya dingus.

“Lastly,” Glosecki says, “you get to use a mouse and keyboard which gives you the best control setup for a first person shooter.” Mouseand keyboard? Hello! This is unmistakably a game we will be playing on our PCs.

Stability is also a major concern following the shonky Battlefield 4 launch, and EA are keen to avoid a repeat performance. “I think we can all agree that Battlefield 4’s stability at launch was less than stellar,” Glosecki writes. “In order to address stability for our game at launch, we’ve had the game up and running in the multiplayer environment for the last two years with both the development and quality assurance teams playing in daily matches. We’ve run two betas for the game as well, one at E3 and the pre-launch beta which just completed on Feb 9th. Both of these have not only helped us solidify the stability of our servers, but have also provided great feedback for us to address in the game”.

A cynic might call such a blog post a soulless and transactionary exercise in PC fluffing in which neither party wants to make eye contact, but its publishing at least points to a degree of consideration being made for the PC version of Battlefield Hardline. You can read the full post hereif you like.