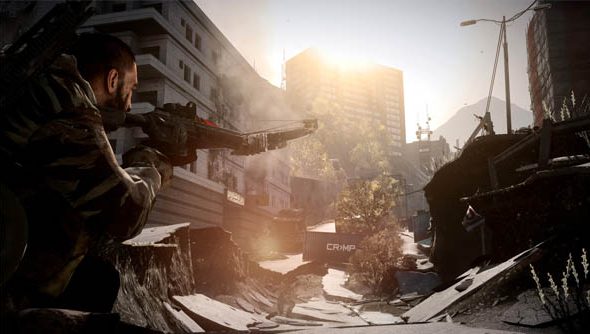 Continuing to mix up the mechanics of Battlefield 3, DICE’s upcoming DLC, Aftermath, adds new maps, vehicles and game modes which are quite a departure for the series.

Shaken up in the latest quake in the Battlefield Youtube channel:

The changes brought inAftermathare detailed in a DICE blog post, but, in short, there’s a new game mode called Scavenger that has each player start with only a knife, a grenade, and a pistol. “”eapons spawn in predetermined locations all over the map, so it pays to learn the map to stand a fighting chance. The particular weapons spawning at these points however have an element of randomness to them, so in order to survive a Scavenger round you will have to explore as much of the map as possible. Sticking together as a team means you might be able to keep enemies from claiming these few and valuable weapons that can turn the tide of a round.”

Think of it a little as Gun Master, in that everyone starts at the same base level and, as the round progresses, players will distinguish themselves by the weapons they’re carrying. Except, it won’t be as simple as simply killing to level up, you’ll be forced to move about the map to get a better weapon.

Then there’s the vehicles. There’s three newbies turning up, though they all sound quite similar. There’s twolight troop transports, the Phoenix and the Barsuk, that are both pretty nippy APCs with a machine grenade launcher and machine gun mounted on the back. Then there’s also a Rhino, a civilian transport with armour plating and a remote machine gun for the driver. The emphasis seems to be on vehiclesthatcan dart between control points.

I really want to see more of this pack in action. Close Quarters but the emphasis on containted infantry firefights and Armored Kill opened it up, giving you vast levels to encourage team play; Aftermath looks to be bringing the level size down to a easier to handle middleground but looks to be making players run in packs simply out of necessity: low ammo, poor equipment, well, best to have other people about you – even if it’s just to act as bullet sucks.

In separate news, on the MordorHQ forums,DICE’s Mikael Kalms has revealed that a future update to Battlefield will add “a console command for disabling the color grading entirely in the game”. There have been a number of mods that have played with this recently, though taking them online would see you EA account disabled. After looking into it and finding “turning it off gives no major competitive advantage/disadvantage”, DICE have decided to simply add the option themselves.