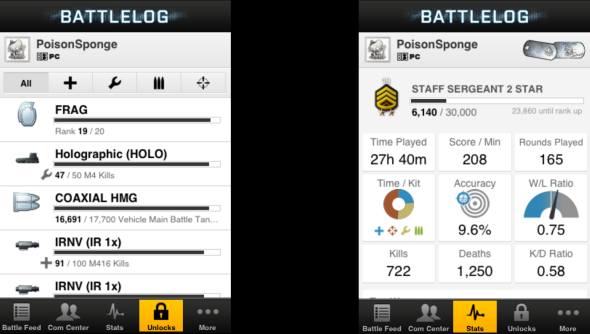 It’s strange to think that the iPhone that could bring Battlefield 3 and World of Warcraft together. After all, these two games started in genres so far apart, but it’s their iOS apps that show quite how close they’re growing together, how the FPS genre has turned into another MMO – and how far they still are apart.

Much like the innumerable official and unofficial World of Warcraft, Eve Online and Guild Wars apps, players can access all the data they want about their in-game character. Where the data differs for Battlefield is that it’s about who you’ve killed, how often, what your favourite weapons are and so on. This app can show you everything from your preferred playstyle to how long you’ve got until you rank up and your K/D ratio.

As Battlelog is also a social network, players can also update their status text and see how their friends are doing, in particular who they’ve befriended and what they’ve unlocked.

However, it doesn’t allow for class customization, it doesn’t track your assignments progress, and doesn’t include weapon descriptions or specifications – something the hardcore are hungry for. Moreover, those elements it does include are often included in the most rudimentary manner – you can’t see all your weapon and vehicle unlocks, or your medals and ribbons.

Finally, this app is iOS only – it doesn’t feature a hi-res mode for iPad users, let alone a retina display capable version for new iPad. Indeed, iPad users may want to pay the £2 to get the much superior iStats for Battlefield 3 appwhich uses the same API as Battlelog, includes a wider range of functionality (including much of the missing content mentioned above) and uses in-game models to show off quite how amazing the game looks.

For a free app, Battlelog isn’t bad; but iPad users (who’ve already splashed out £400 so can afford £2 more) should move to the much superior iStats.