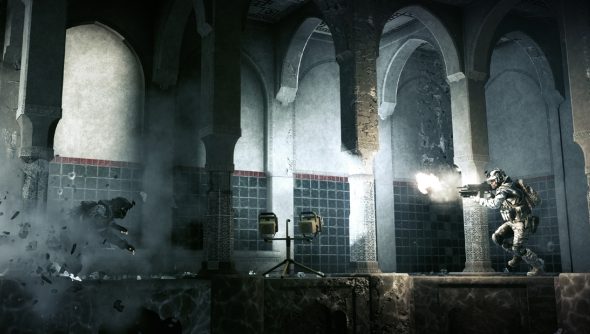 My first reaction to the term “HD Destruction” scared a child on the bus. He was trying to smile at me and just as I was about to smile back I read the term on my phone. I scowled, he looked scared, and I felt bad. But it’s grown on me now, partly because it seems like a cheeky twist of marketing speak, and partly because the explosions in the new Battlefield 3 expansion Close Quarters are incredible. Although if you’d called them “fantasti-splosions”, that kid wouldn’t have been quite so scared.

ICE are theming their upcoming DLC packs around a series of experiments, so Close Quarters is what happens when you take Battlefield 3’s destruction and guns and put them in really tight environments: no sniper rifles, no jets; just infantry fighting in smallish spaces, where everything explodes. It’s my kind of experiment: one with a lot of debris.
This squeezing of the game results in tall maps, like the multi-levelled Donya Fortress: an old palace that concentrates the fighting between the US and Russian forces into a splintery death trap. The action ranges from the cellar, quite open but dark so even with the loose architecture you’re never quite confident enough to move as speedily or as confidently as you’d hope. And when the lead pings the walls it fills the air with debris. At least down here it has room to fly: the indoor area above is a lot more cramped, with tight angles to manoeuvre and crumbly walls that take any stray bullet and magics them into rubble.


It leads to the deadliest part of the map: the water gardens. Surrounded on all sides, it’s almost devoid of cover. Any of the surrounding balconies could have enemies on them, although returning fire will crunch the cover into nasty, flying scree.
But that’s like everything in the map where the architecture is tuned for destructibility: columns inside leading to arches disappear as players duck behind them for their meagre cover, only to have DICE’s tech allow for every bullet to bite away another chunk. I really shouldn’t be so taken with technology that’s been around for a few years now, but the destruction here is really game-changing and tactical. You’re never safe where you are.
And if that’s not enough of a squeeze for you, Ziba Tower’s even more compact. The nightclub’s classy clean lines are torn up, glass crumbles, sofas have their warranty voided. Most interesting is how the walls react: they start out solid, but bullets punch holes in them. The longer the fights go on, the less cover there is. What was once a corridor that you could use to hide from a line of sight, is a gaping, terrifying, broken thing: the ragged holes make it difficult to know where you can safely cower.


I’m not a big fan of frantic action, but I do like it when a developer tries to do something different to push their tech into new and interesting directions. It could have been so easy for DICE to make some indoor maps without a reason for existing, but here they’ve been made to concentrate the engine’s crumbliness and see what can be made of it the tech that’s been designed for the biggest imaginable fights. I didn’t buy the other DLC because it felt like the sort of knocked together classic map-pack that Activision would concentrate on, but I’ll support someone willing to experiment with explosions.