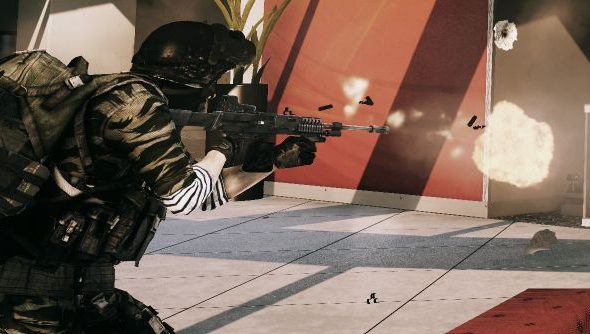 We’ve long known to expect Battlefield 4; just as Spring follows Winter, as Amy Pond follows the Doctor, as tea follows crumpets, Battlefield 4 will follow the current shooty DICE thing into existence. So what’s this about? Well, yesterday a couple of voices belonging to people who really ought to know began to mouth vague words about the new Battlefield again. What’s more, there’s something about the tone that suggests excitement and, dare I say it, imminency.

Update: Observant Facepunchers have discovered a gigantic number which seems to confirm, on the balance of probabilities, that DICE will be talking Battlefield 4 at Sony’s PS4 reveal this evening. See it below the break. Squeee?

Update update: The big number appears to be a fake, based on this admittedly lovely piece of fan art. Silly us. Set your anticipators to ‘reserved’, but we still think there might be a big Battlefield announcement coming tonight.

About 11 hours ago, GameStop’s CEO tweeted: “Got to see Battlefield 4 today and all I can say is WOW! Thanks EA for the sneak peak. Can’t wait for you all to see it.”

The tease was followed up on EA’s Origin account with a swift retweet and an affirmation: “BF4 is coming!”, and on the official Battlefield account with a curt, “BE ADVISED”.

It would be a kind of madness to ignore that today is the day journalists with different priorities to ours have been flown to New York to see something called a PS4. But whether this sudden flurry of Battlefield com chatter is indicative of an impending announcement or merely the vapour trail of a leak well-managed, we cannot yet know.

A DICE community manager mentioned midway through last year that Battlefield 4’s beta would happen in Fall 2013. Don your specula-goggles and let us know what you think’s going on in the comments.

Update update:Not this. Don’t look at this.