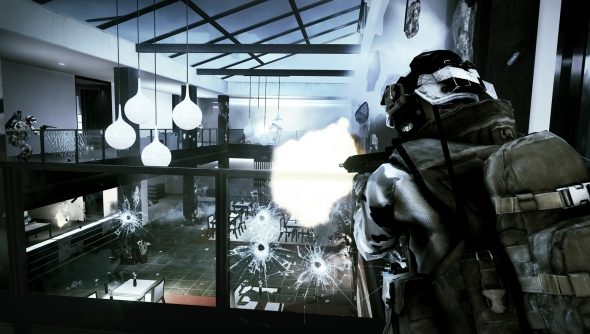 You can’t keep something as wide-ranging as Battlefield Premium a secret, and the full details appear to have leaked out of EA: Premium won’t be a subscription service, instead for a one-off payment of £40, which is more than I spent on the game, players will have be given new items, all the new and upcoming expansions (including early) access, and more.

It’s the way of the world, a model grabbed from the travel industry: all the premium members are in a lounge with frosted over windows. They’re popping champers while you cultivate your deep vein thrombosis back in economy. It’s rather ugly.
Those that buy into it will be allowed two weeks of exclusive access to the expansion packs, which will give them time to adds to their multiplayer unlocks as they shoot their golden guns at each other. I doubt they’ll be using this time as a beta/bug-fixing period, and why accessing it before everyone else does is considered a plus I’ll never know. In fact, splitting a community into maps haves and have nots is really rather idiotic: why would you deliberately splinter a community? I wish I wasn’t so interested in the Close Quarters map pack, because it makes me forget how ugly it is to see a game community being chopped up. And EA, by giving access to the maps to people that pay the most, have found a way to finely dice it. Premium members will be able to jump the queue in the multiplayer servers, for crying out loud. That’s outrageous.
I don’t have much problem with access to exclusive items, when all they are currently are knives, dog-tags and costumes, or that premium users will also be able to reset their stats. I’m actually rather glad there will be premium only special events, as there’s a real value in developer ran competitions.
What is rather egregious is there’ll be premium only double-xp weekends: couple that with the early map access and you really can’t say they’re not paying for an advantage. This is EA selling a competitive edge.
Guides and strategy and deeper stat tracking are all included as well: those are the sort of things that you can easily cobble together elsewhere, but I do like them as part of a package: it’s more more palatable than simply boosting players stats.
I’m surprised at how upset this has made me, because it’s wrapping up pay-to-win in a subscription package. You can’t look at what’s on offer and not think it gives you an advantage as a Battlefield 3 player: knowledge is an advantage, stats being boosted certainly gives you an edge. I want it, because there are additions to a good game, but I wouldn’t buy it.