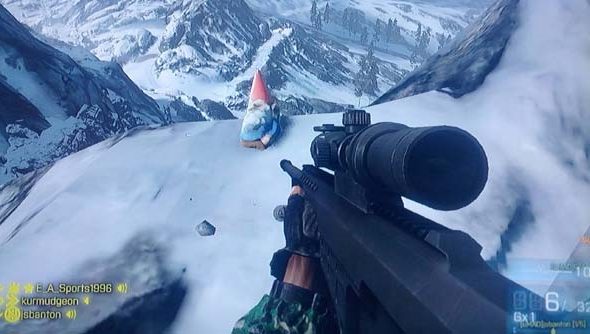 And frankly, we don’t know too many gnomes. It is, of course, cognitive scientist namesake and regular Valve cameo-ist Gnome Chompski that sharp Redditors have found perched unceremoniously at the top of a mountain in new Battlefield 3 DLC Armored Kill. How has he found his way here? Theorists have speculated that his appearance signals an imminent EA buyout of Valve, or the confirmation of much-pandered-after sequel Half-Life 3. The truth?

Well. It’s that gnomes are inherently funny, and most likely that DICE are, unsurprisingly, huge Valve heads.

Gnome Chompski made his first appearance in Half-Life 2: Episode 2 as that game’s second least feasible Achievement, after the grub-stomping – players were required to carry the garden gnome throughout the length of the episode to earn ‘Little Rocket Man’.

Chompski fished under the radar for a couple of years, before reappearing in 2009 for a career-best performance in Left 4 Dead 2, this time asking that players lug him all the way through Dark Carnival, the big china lump.

If you’ve any more creative interpretations of Chompski’s resurfacing in Armored Kill to offer, do let us know in the comments.