Spaceships are rarely seen in Warhammer 40,000 despite it having a sci-fi setting. The core tabletop game is all about ground-based conflicts, and almost every videogame adaptation of the setting opts for the boots-and-bolters approach, too. This is what makes Tindalos Interactive’s Battlefleet Gothic: Armada series so appealing – it brings the colossal, cathedral-like space barges seen in the pages of the Warhammer 40K rulebook to life. And in the sequel there’s more choice than ever before.

Battlefleet Gothic’s mechanical roots are in Games Workshop’s niche tabletop game of the same name; a turn-based tactical battle set among the stars. The physical version was discontinued in 2013, meaning the last five years of advancements in the 40K universe have never made the transition to miniatures form. Battlefleet Gothic: Armada 2 makes this its main mission: with all 12 of the tabletop game’s factions present in digital, real-time form, you’ll be able to engage with up-to-date fleets that feel part of the modern Warhammer 40,000 world.

Gone are the Eldar and Dark Eldar fleets of old, and in are Aeldari and Drukhari, complete with any required visual tweaks. Adeptus Mechanicus return with a new vigour thanks to their recent rework in the lore and models range. The campaign rages against the backdrop of the Gathering Storm and the 13th Black Crusade – 40K’s latest storyline – and sees the Imperium clash with Necrons and the Tyranid Hive Fleet. Even Roboute Guilliman features in his new role as Lord Commander of the Imperium. In short, this is the most up-to-date version of the 41st millenium to feature in a videogame.

A recent hands-on with Armada 2 allowed me to take command of any of the 12 factions in the game’s skirmish mode. This mode is all about capturing strategic locations and outpacing your opponent in a race to the maximum victory points threshold. Holding locations generates those points, so maintaining air superiority and denying the enemy access to these zones is, arguably, more important that securing kills.

Each side has access to a small fleet comprised of ships that are each designed to perform a specific task. While every faction has unique vessels there are mirror images everywhere. For example, there’s always a collection of large units capable of deploying smaller fighter squadrons, used for harassing tactics. But it’s beyond these similarities in the smaller, unique details, that Battlefleet Gothic: Armada 2 finds its footing. 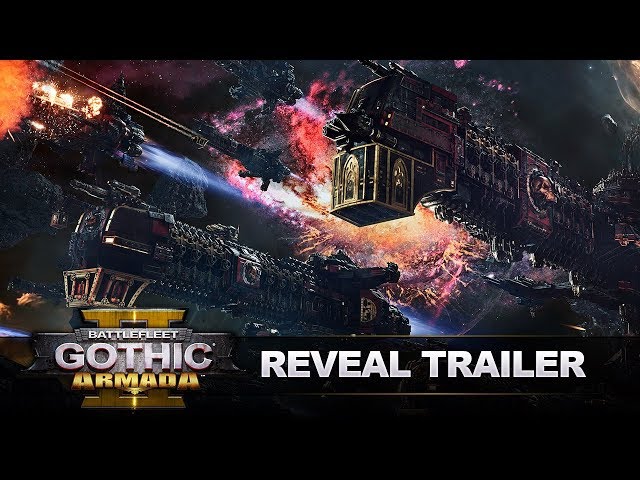 Imperial ships, in all their gothic splendour, must engage the flames of kilometre-long thrusters in order to speed up and glide through the inky blackness of space. Set Necron ships to do the same, however, and they’ll warp out of existence, only to reappear at their target destination in a flash of green. While the end result is largely the same – both ships get to where they need to be quickly – their unique technologies position them for entirely different roles. Necrons are deep strikers that are able to instantly swarm their targets and escape when the going gets tough. The Imperials are more brutish, and so their physical bulk travelling at top speed makes them an effective battering ram. Yes, ramming is a possibility in the space battles of Warhammer 40,000, of course.

Experimenting with each faction’s variations on core mechanics is Battlefleet Gothic: Armada’s greatest pull, much in the same way as how the tabletop universe’s variety is one of its greatest strengths. With 12 factions there really is an option for everyone, be it the ramshackle Orks with their bolted together space skips, or the T’au fleet whose broadside volleys are one of the most spectacular laser shows ever seen in an RTS. Quite how all these factions will fit into the game as a whole remains to be seen – the campaigns need to offer much more depth than skirmish mode’s race-to-the-finish – but when it comes to core mechanics and use of the licence, Tindalos Interactive is off to a fine start.