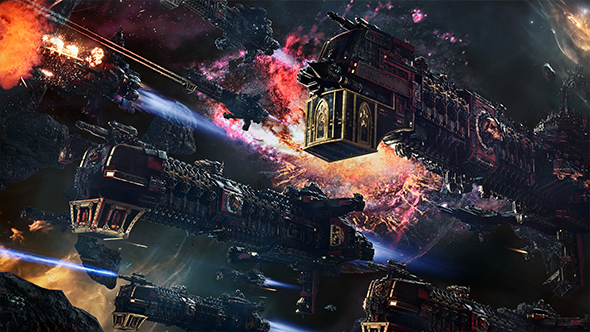 Legions of ships mass for interstellar war, and I’m just sitting over here mumbling “spoice muh-reens” to myself and giggling. Yes, it’s time for more Warhammer 40,000, with a space RTS sequel in the form of Battlefleet Gothic: Armada 2. Building on the first game with more factions and expanded features, the game’s set to release for PC in 2018.

Can’t wait for more? These are the best strategy games on PC.

There will be a dozen factions available at launch, every one from the tabletop game and original Armada expansion. For those of you keeping track at home, that includes the Imperial Navy, Space Marines, Adeptus Mechanicus, Necrons, Chaos, Aeldari Corsairs, Aeldari Craftworld, Drukhari, the T’au Merchant and Protector Fleets, Orks, and the Tyranids.

The game will feature multiple campaigns set during the Gathering Storm and the 13th Black Crusade, along with “bigger battles, refined gameplay, improved multiplayer modes,” and more balanced online play, as well as expanded customisation for the ships that make up your armadas.

We’ve got no more specific details than that, but we should be hearing more about the game soon. Publishers Focus Home Interactive will be hosting a showcase early next month where they plan to reveal more information.