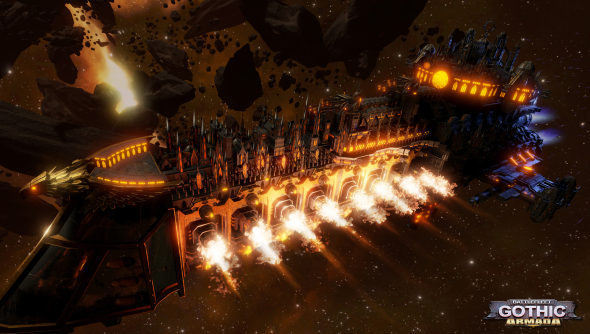 Battlefleet Gothic: Armada is basically a naval RTS, except the sea is a 2D slice of deep space, the ships are more like weaponised cathedrals, and you’re not sinking pirate ships but Eldar frigates, Chaos dreadnoughts, and whatever it is the Orks have slapped together and called spaceworthy.

We’ve been seeing a lot of Games Workshop series turned into PC games recently but I’m convinced Battlefleet Gothic’s going to be one of the best.

Adapted from the Warhammer 40k spinoff board game, Battlefleet Gothic, Tindalos have reimagined the turn based game of dice rolls, rulers, and blast radius cards into a game of two parts: a heavily tactical RTS and a dynamic strategic campaign, similar to Dawn of War II and the Total War games.

In the campaign mode you’ll outfit your Imperium fleet and direct it around a star map bustling with planets, warp phenomena, and invading armies. Whenever your fleet reaches a conflict hotspot you drop into a real time skirmish. Depending on what the hotspot was – maybe a Chaos fleet bombarding an Imperium planet or a commissar’s transport under assault from an Ork battleship – the skirmish will be centered around different objectives. One battle might see you escorting a ship, or defending a planet, or scouting out a larger fleet.

Battlefleet’s combat feels distinctly naval: everything takes place on a 2D plane and most of the ships’ weapons depend on good positioning – slow moving torpedoes have to be fired ahead of your targets, broadside cannons require a ship to be side on with its foe, and, when facing an incoming volley, you can minimise damage by turning to face the blast.

I was worried that commanding up to 15 ships in real time with no option to pause and issue commands could be overwhelming but the ships move at a glacial pace, giving you time to issue orders and arrange formations.

Tindalos have built a behaviour AI system to relieve some of the pressure. You can give ships a checklist of states on how to behave in battle: telling it to prefer ranged combat over ramming or to favour its torpedoes over its laser cannons. Other commands will cause it to warp out of combat if its hull strength falls below 25%. This all frees you up to move your ships and select their targets but to leave the maneuvering up to the AI. You’re free to take over and issue direct commands at any time but you can also be confident to leave the ships to handle the minutiae themselves.

Every system on Gothic’s ships can be individually disabled. You can punch a hole in your opponent’s warp drives to prevent her ships fleeing, target her broadside cannons to protect your boarding vessel’s approach, or shoot straight for the bridge in an attempt to kill its captain.

Each ship has a crew who can become more proficient with practice and provide bonuses to your ship’s performance. You might have a small gunship which has the finest pilot in the fleet, making it fly faster and with more agility than any other ship in your command or a dreadnought with a most accurate gunnery captain.

But those crew need to watched. A cowardly captain may disobey orders and flee from the battle, this doesn’t just leave you a ship down, your entire fleet’s resolve takes a knock, increasing the chance of further insurrection. If a captain breaks rank too many times then you can order that ship’s commissar to put a bullet in his skull. These traits aren’t always a bad thing, though: a coward is so intent on self preservation he can push a ship to run even after its suffered damage that would normally to prevent it from flying.

The strategic challenge of the campaign is compounded by the Imperium’s callousness. When a planet comes under attack the Imperium issues an Exterminatus order, if you can’t repel the invaders within three turns they will sever it from the warp, the planet disappears from the campaign map, and your empire becomes a little smaller. Each planet offers your fleet bonuses and the resources you need to repair your ships so each Exterminatus makes you permanently weaker.

The campaign map generates missions for you so you’ll have more to do than simply wiping out enemy fleets. Sometimes you’ll escort fleet commanders, hold out against waves of enemy forces during an evacuation, or spy behind enemy line.

While the main campaign can only be played as the Imperium you can command an Ork, Eldar, or Chaos fleet in multiplayer. Your multiplayer fleet can gain experience and upgrades in much the same way as you do in singleplayer, too.

Many of the recent Games Workshop adaptations have remained faithful to their original board game heritage to their detriment. The board games are reliant on dice rolls and the social fun of being sat around a table with friends, Tindalos’ adaptation of Battlefleet Gothic captures the concept of the original but looks to thoroughly update its mechanics to suit it on the PC.

Tindalos hope to have Battlefleet Gothic: Armada ready for release by Christmas.