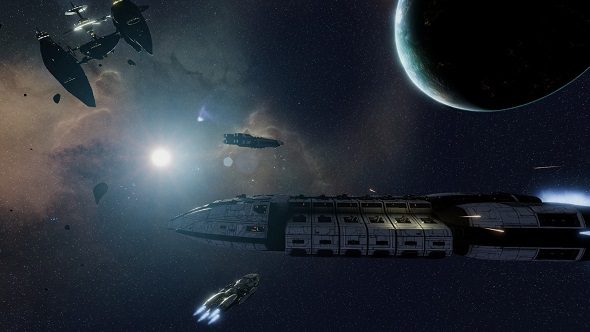 The year is 2017. After decades of games based on TV shows and films that really ought to get in the bin, bar the few glimmering exceptions, the tides may be turning. Later this month, Battlestar Galactica looks like it might be one of the few shows to get a good game, in the form of Battlestar Galactica Deadlock.

Want more of the best space games on PC? We’ve got a list – hopefully Battlestar Galactica Deadlock will be in it one day.

It takes place during the First Cylon War, where you get to play as the Colonials, facing off against the Cylons to free the Twelve Colonies. I’m honestly just spouting nouns here as I have no idea what any of them mean.

That said, I’ve played my fair share of space strategy games and this one looks to have the right ingredients. Design your own fleets, organise them, and issue commands throughout battles, then watch events unfold.

It’s turn-based, rather than real-time, functioning similarly to games like Frozen Synapse, where each player chooses a move and they’re executed simultaneously. You can see almost twenty minutes of gameplay in the video above, posted just a few days ago by Scott Manley.

There are more details you can check out on the official Steam page, plus screenshots and videos of ships blowing up. It’s coming out on August 31, so that’s more than enough time to binge the show in preparation.