You can be forgiven for not giving Battlestar Galactica Deadlock a proper look when it first launched. Despite no shortage of praise from our own Matt Purslow, it flew under the radar for many. Not too surprising, perhaps, given that the license is hardly in vogue, and publisher Slitherine have a record for catering only to the most hardcore of strategy grognards.

Developers Black Lab Games aren’t worried, though. There are many of them, and they have a plan (and a dev diary) to continue updating and refining their game until it is the definitive Battlestar strategic simulation from here to Kobol.

Angry murderbots aren’t the only thing waiting for you in our list of great space games on PC. There’s angry aliens, too!

Battlestar Galactica Deadlock wasn’t a perfect game by any means at launch, but it was good enough to earn itself the title of best Battlestar game by a healthy margin, beating even the excellent fan-made Diaspora. Black Lab are quickly making themselves into a studio well worth watching, as not only are they listening closely to everything said about the game, but implementing real changes and improvements over time.

The game has already received several significant patches since launch, but the next one is going to bring several major quality of life improvements to the game, including a far better intel screen, giving you a solid breakdown of what exactly is happening and where, and apparently giving you occasional intercepted information that you wouldn’t have otherwise seen through the fog of war. 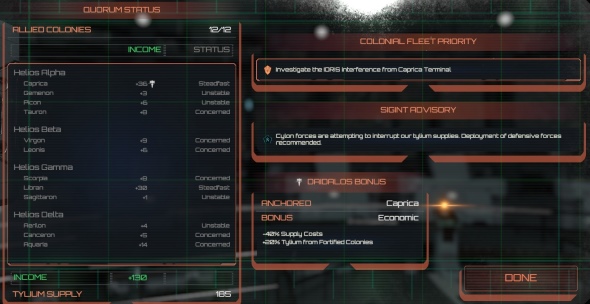 Another useful improvement one the way is the ability to assign multiple fighters to squadron groups that can be issued bulk orders. Given how finicky it could be to micromanage swarm of fighters in the launch version, it’s no surprise that they’re trying to make things a little easier here.

Most importantly, though, is a truly Battlestar feature that I’m honestly amazed wasn’t in the original game. Rather than having to fight every battle to the last, you can order an emergency FTL jump to extract capital ships from combat. As in the show, it takes a few rounds to fully spool up the jump engines, costs extra Tylium, and dumps you in an unpredictable location within jump range, but it’s sure as hell better than losing an entire Battlestar to an oncoming nuclear salvo.

This isn’t all, by any means. Some other changes have been outlined in previous dev diaries, with a fair few UI upgrades being done with next month’s console version of the game in mind. It’s great to see the game so well supported and the devs listening closely to their players, and as a fan of the TV series (up until it stopped making sense), it’s great to see the game doing it justice, even if it’s a litle late.

You can pick up Battlestar Galactica Deadlock on Steam here, where it’s currently 25% off its usual £30/$40 RRP. Given Slitherine and their avoidance of steep discounts on their more recent games, it may well be the best price for the game for some time to come.