Shams Jorjani is no stranger to signing big projects. As Paradox’s vice president of business development, he’s been intimately involved in the deals that birthed Cities: Skylines and Pillars of Eternity. But, for the first time, he was starting to feel the pressure.

“Shams,” his colleagues told him. “You can’t fuck this up.”

Due to what Jorjani was working on, a name was spreading around Paradox’s Stockholm offices, murmured in reverence: Jordan Weisman. In the ‘80s, when many of Jorjani’s workmates cut their teeth, Weisman had created the Shadowrun and MechWarrior tabletop RPGs. And in recent years, he’d founded Harebrained Schemes: the studio behind Shadowrun Returns and its excellent, literary sequels. Now he was on the phone talking to Jorjani about publishing a wonderfully chunky turn-based tactics MechWarrior adaptation, named BattleTech.

If you trace many of the PC’s most beloved games back to the beginning, you’ll find roots and rulesets in pen and paper gaming. But it’s highly unusual for a tabletop designer to be so involved in ushering their creations into the digital realm. “My career, unlike a lot of tabletop guys, has been pretty split,” says Weisman, by way of explanation. “Half of tabletop, half of digital.”

He’s reflecting on his history among the Romanesque rafters of Gamla Riksarkivet, the Swedish national archives. Jorjani, who didn’t fuck it up, sits in an adjacent room giving another interview.

30 years ago, you would have found Weisman setting up BattleTech Centers around the world – physical venues where mech fans could go to play multiplayer in enclosed cockpits fitted with multiple screens, joysticks, and rudder pedals. 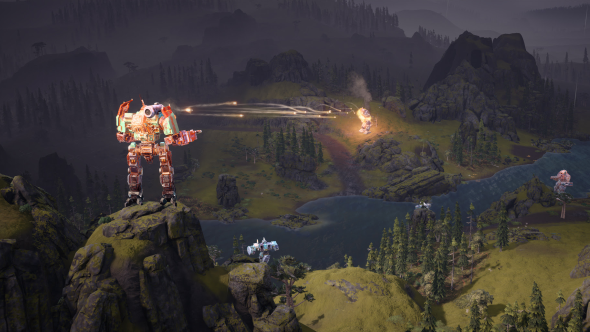 “We did a lot of pioneering work,” he muses. “It’s because I was ignorant. If I was smart, I would have realised that was fucking impossible, and we wouldn’t have tried it. Ever since then I’ve gone back and forth between computer games and tabletop.”

The new BattleTech is, unlike the Centers he set up back in 1987, designed for a platform that already exists: the PC. But it has a boldness that belongs to Weisman’s younger years. Harebrained could have built on the turn-based combat engine they’d made for the Shadowrun series. Instead, they’ve put together an ambitious new one in Unity. With complete freedom of movement in 3D, it plays nothing like the cyber-wizard’s chess of Shadowrun: Dragonfall and Hong Kong.

In taking their tactics off the grid, Harebrained have fulfilled the fantasy of mechs as heavy machinery: they’re soldiers, yes, but they’re also vehicles. Sometimes you get them in a tight spot, and they need reversing. Sometimes you’ll be in the perfect position to pummel an enemy with a barrage of rockets – but facing exactly the wrong way. These suits are powerful, but my goodness they’re clumsy. You’ll need to plan ahead if you don’t want to be pulling three-point turns under fire.

In going full 3D, too, the studio have stepped away from the realm of abstract rules and percentages that defined Shadowrun. To navigate BattleTech’s outdoor maps is to wrestle with a simulation. At one stage, I wondered why one of my squad’s artillery wasn’t landing the way I’d hoped – only to notice that half its salvo was hammering impotently against a crag close enough to halt the trajectory of my missiles.

Most palpably, though, the engine switch has given BattleTech some much-needed heft. Where Shadowrun combat felt weightless – like a papercraft reworking of XCOM – BattleTech throws its weight around. When mechs take damage they shudder horribly under the onslaught. If they lose both their arms to laser fire – a very real possibility as the fight wears on – they close the distance to melee and nut their enemies square in the cockpit. It’s like they’re fighting the most expensive bar brawl ever. 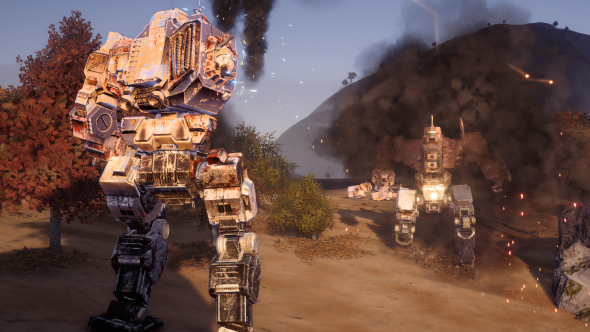 There’s even a system designed specifically to account for the weight of these lumbering walkers. It’s a valid tactic to focus your fire on a specific mech until their Stability meter fills and they keel over, becoming an easy, stationary target. On their backs, mechs are ripe for limb and headshots like those seen in the first Fallout – until it’s their turn to pull themselves back to their feet.

Just as important is heat: all actions generate the stuff, and once your mechs get too hot they start taking internal damage. Eventually, they’ll shut down, again becoming sitting ducks for the rockets of enemy pilots. To keep your machines cool and upright, you’ll have to pick your moments to sit still and turn off the engines (perhaps cracking open a window, although that isn’t visually represented in Harebrained’s battles) before flicking all of your weapon switches back to ‘bang’.

If BattleTech scraps are all about careful management of the systems under your control, the same is true for its metagame. As you’d hope from storytellers as accomplished as Harebrained, the game will come with a proper single-player component – in which your mercenary company is hired by a deposed queen. You’re paid to help take back her throne, but that’s not where the campaign ends.

“Her story is a big part of your story, but it’s not the totality of it,” explains Weisman. “It will continue whether she succeeds or fails. It’s about your company, and growing your company within the geopolitical landscape.”

Harebrained have blocked out an area of MechWarrior space called The Periphery, made up of about 2,000 planets. As the manager of a mercenary unit, you’ll choose which planets to land on, which governments to negotiate with, and which contracts to take. The notoriety you gain among the factions of The Periphery becomes the determining factor in who’s going to hire you – and consequently keep your whole operation running. 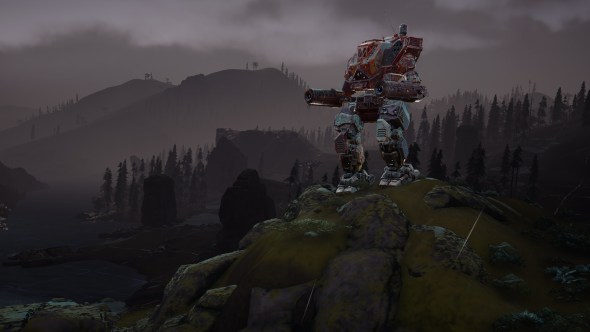 “A mercenary company is more than just machines,” points out creative director Mike McCain. “It’s all about the men and women who pilot the Warriors themselves, the mech-techs that prepare them, the medical teams that keep them alive, and the engineers and navigators that run the ship. All the people behind the scenes. Unfortunately, you have to pay all of them.”

It takes a village of squires, shoers, and armourers to support a knight, and apparently mechs are no different.

The higher level strategy in single-player BattleTech will lie in choosing where to invest your earnings. Beyond your people, there’s also your ship to worry about: the Argos, a found relic you renovate over the course of the campaign. And then there are the parts you bolt onto your mechs. These are customisable weapons of various classes that complement the developing skills of your pilots.

Back on the battlefield, I eventually lost that mech I was relying on for artillery support. I’d been using a smaller, nimbler mech as a spotter, while raining down rockets from over the hills that shaped the map. Sadly, that rain took the form of a gentle drizzle. 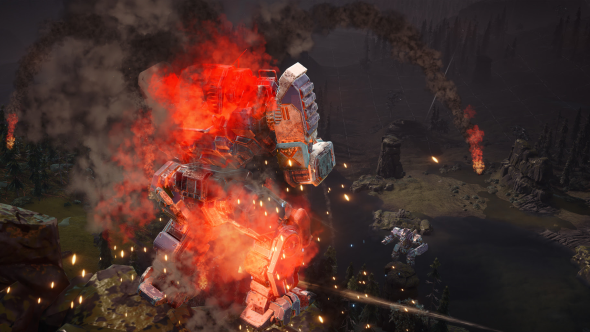 In my after-battle report with Harebrained, I learned my squad wasn’t kitted out for long-range bombardment – but it could be, if I chose to steer my unit that way. That potential to clamp geopolitics, management, and low-level tactics onto the same chassis is where BattleTech’s rather grand campaign plans promise to deliver some 1987 magic.

Downstairs in Gamla Riksarkivet, past the slide where archivists would have hurled their most precious books should the building have ever succumbed to fire, Weisman is telling another group of journalists about his history.

“Battletech is old, as I am,” he says, before correcting himself. “Not quite as old as I am. Just a little younger. It’s gone on to be about 15 videogames over the years: from the MechWarrior series, to real-time strategy MechCommander, to MechAssault’s cartoon action.

“But what we haven’t done is return to the roots of the franchise: tactical turn-based combat. We’re very excited to bring that vision to life – that vision from 35 years ago.”