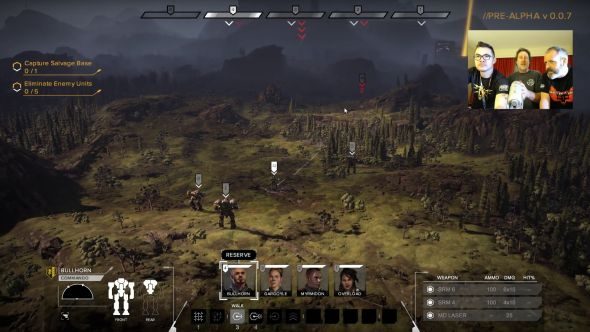 Battletech made nearly $2.8 million on Kickstarter thanks to a combo of passionate fans of the MechWarrior IP and Harebrained’s successful work with the Shadowrun series, also funded via Kickstarter. That’s a lot of money for a smallish team, and they’re about ready to start showing it off.

While you wait, here’s some excellent strategy games.

Ahead of displaying it all to the world at Gencon, they’ve released a video to backers showing what they call a “Super-Pre-Alpha” build of the game. In it they spend more than 20 minutes going over aspects of the game, how combat and strategy works in their game. It is supposed to be for backers only, but one has posted the unlisted YouTube video on Reddit, if you’re feeling curious.

If you happen to be at Gencon this week, which runs from today through August 7, you can play a demo of the game down at Booth 2329. If you want to see the video legitimately, Harebrained have also launched a new scheme to allow for late backing – something they advertised behind the backer paywall on Kickstarter, oddly.

Thankfully, a fan has posted the details on the official forums, showing you can head to this page to be signed up as a late backer. There’s various tiers and rewards available, so take a look.