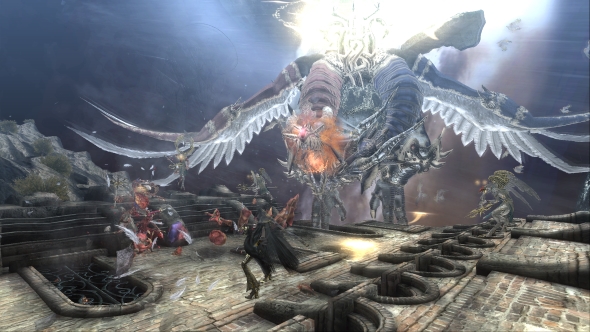 We’ve only been waiting seven years for Platinum’s most beloved game, and now Sega have finally made it happen: Bayonetta makes its surprise arrival on PC today. The 2010 original, previously only available for PS3, Xbox 360, and Wii U, can now be bought from Steam.

Like your games older than Bayonetta? Try one of the best old games on PC.

We’ve already had chance to play the game on our i5/GTX 1060-powered test rig, and if you’ve spent time with Nier: Automata on PC you’ll know what to expect. The game is locked at 60fps, meaning it’s super smooth, but those with high-powered machines won’t be able to get the mountain-high frame rates that you’d expect from a title this old. It supports a variety of resolutions, including ones above 1080p. We saw solid performance from the game at 1440p, meaning it’s already a step above the old console versions. 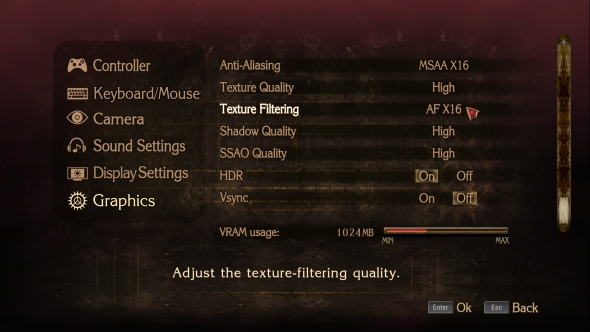 There are some problems though, some of which we’d expect. Like Nier: Automata, the PC port is a little bare bones. There are very few graphical options – just anti-aliasing, texture quality and filtering, shadow quality, SSAO quality, and HDR – and just three presets on offer. There is a VRAM meter though, which is to be commended.

There are a few oddly arranged keys, too. On the menus pressing Esc doesn’t go back to the previous menu, it’s inexplicably bound to right click. Menu items must be left clicked to select; enter or space won’t work, despite the menu allowing navigation with WASD.

In more concerning issues, I’ve discovered a bug which has made playing the game with a mouse and keyboard impossible. The menus glitched out and removed all keybindings from the controls menu, and when I attempt to remap them I continually get an error claiming I’ve bound a key to multiple actions. When dismissing this error the menu then becomes unresponsive; I can move the mouse but clicks won’t register. I’ve have to Alt+F4 to escape this situation. I get the error every time (despite checking for any keys being multiple-bound).

We’ve informed Sega of the issue and they’re looking into it. They report that it’s the first time they’ve encountered it, so hopefully if you pick it up you won’t have that problem.

Menu glitch aside, Bayonetta seems to follow very much in the footsteps of Platinum’s previous port: nothing to get excited about in terms of PC options, but we’re happy to have the game break console-only tradition. It feels a bit like playing a console game on PC, but at least we can finally play it. And for anyone who’s been holding out on this port for seven years, today’s probably a sweet day indeed. To celebrate, here’s a dev diary, including the extremely detailed story of how Bayo got her glasses:

Are you planning on picking up Bayonetta now it’s finally made it to PC? Let us know how you’re finding the port in the comments.