New football game Behold the Kickmen opens with a disclaimer that it was made by someone with no interest or understanding of the game of football.

“No research was undertaken, but be honest [with yourself] it’s all pretty simple stuff so none was necessary,” it reads. “Please don’t write in to tell me I’ve made a mistak [sic], I know exactly what I’m doing.”

What follows is a FIFA-like game which, with both feet, enthusiastically tackles the idea of simulating football. It doesn’t get things quite as flagrantly wrong as, say, Rocket League – there are still 11 men on two sides, each battling to “do a goal” on the opposite end of a pitch. But Kickmen takes some liberties and makes some assumptions.

In the tutorial, we’re warned that matches are overseen by Umpires, Judge Dredd-like figures of ruthless justice in a world of football crime. And we’re told that goals are fiercely protected by brutal warriors named ‘goldkeepers’. That bears out: on the pitch the goalies (goldies?) creep inexorably towards the ball with their hands stretched wide in front of them, looking more like Rayman than Seaman. 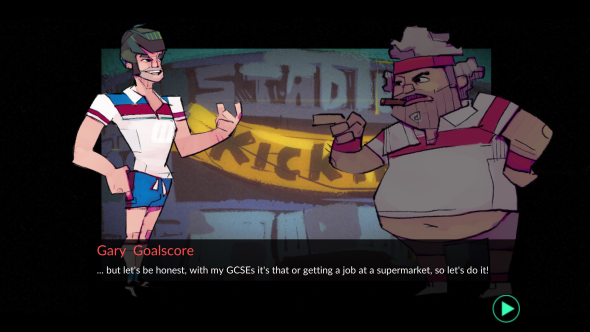 This inherent daftness typifies the tone of Dan Marshall – aka Size Five Games – the man behind The Swindle, and co-writer of the comedy adventure games Ben There, Dan That! and Time Gentlemen, Please!. Kickmen has its own story of sorts, about a scrappy Leicester City-style team working their way up through the leagues to become unlikely champions. It’s told through visual novel vignettes in between matches, and is, as you would imagine, supremely silly.

“The writing process isn’t me with post-it notes on the wall and weeks on end in coffee shops and one of those yellow pads,” Marshall says. “I’d just type out any old nonsense and that was basically it. It’s kind of how Ben There, Dan That! and Time Gentlemen, Please! were written too. I think the more I overwork dialogue the blander it gets, so it’s better for me to just have this stream of free-association nonsense.”

The initial kernel of Kickmen came from a similar place of carefree irreverence – burned out from another project, Marshall first developed its prototype in a game jam.

“I’d watched the trailer for Super Arcade Football and thought it’d be funny if I made a football game, despite hating football,” he remembers.

What was intended to be a Super Hexagon-ish score attack game about kicking a ball against a wall grew in ambition after the GIFs Marshall posted on Twitter began to take off.

Okay just did an interview for BBC Three about #Kickmen. What in actual hell is going on.

“I’ve never really had that happen to that degree before,” he says. “I’ve always been the one emailing and shouting and doing my PR. I’ve stuck with it because it’s been by far my most popular game. I enjoyed making it and I loved the silliness, but underlying everything was the attention it got.”

Somehow, it all works. An outsider’s perspective on football has allowed Kickmen to laugh at football’s self-importance, and its excesses. Training opens with an instruction to “kick a ball about and pretend like it’s an important job.” Sometimes, the tone threatens to tip over from daftness into satire: “Did you know? Some Kickmen are paid more money *per week* than most doctors, nurses, and firefighters receive in a year? This is because that’s fine.”

Most significantly, though, Kickmen’s disregard for real football and its rules has benefitted the game’s mechanics, freeing up Marshall to indulge in ideas FIFA or Pro Evo would never get away with.

Tackles in Kickmen are slow-mo sliding thrusts, with a dramatically-indicated window for seizing control of the ball. Likewise, the offside rule becomes a designated area which you must leave before the timer is up, or else. I haven’t dared find out what happens if you stay.

Meanwhile, a ‘fever’ system tracks impressive combos of tackles, passes, and kicks, your ball skills banking points and earning you currency to spend in the game’s management layer. Extra time is gathered via icons that spawn on the pitch: if you’re winning you’ll want to avoid them, and if you’re losing you’ll need to decide whether you want to divert from goal-scoring to collect crucial seconds.

These wilful inaccuracies culminate in a palpable sense of energy, helped in no small part by Marshall’s breezy prose and a noisily enthusiastic soundtrack. Kickmen barrels along, powered by its own silliness and overriding, well, wrongness.

According to Marshall, that balance only came together in the last two or three weeks.

“Kickmen was basically finished about a year ago but it wasn’t the Second Coming of Indie Games,” he says. “I kind of have this feeling that no matter how well BTDT / TGP / The Swindle did financially or critically, they’re not mentioned ‘up there’ with Braid and Limbo. So in my mind, at least, they failed,” he says. “This is my hang up, don’t worry I am aware how silly it is.” 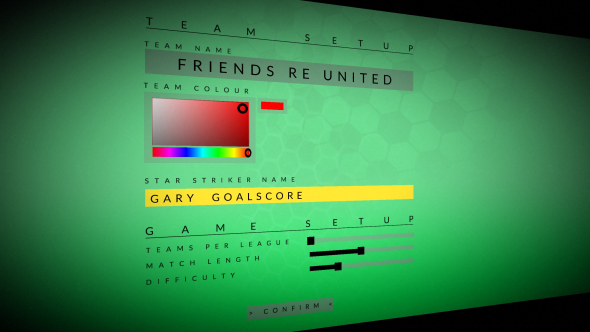 At that time, Kickmen was a solid six or seven out of ten, as Marshall saw it, and he would have been glad to get out of his life. But as he prepared to put it live on Steam, the Summer Sale started. And in the days and weeks after he changed his mind.

“I decided I’d kick myself if I didn’t at least spend that month polishing it up,” he recalls. And then something magical happened. I fixed up the Fever system so it was more fun, nailed the balancing much better, and made the AI more interesting in parts. And the game kind of clicked.

“It’s probably an 8/10 game to me, but I reckon by downplaying it people will be pleasantly surprised, instead of all hyped up and disappointed.”

Most football fans are well-versed in disappointment, of course, but here’s hoping Behold the Kickmen can be a cause for celebration.