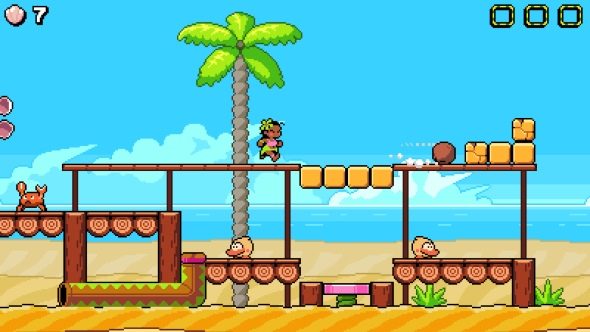 It’s that time of the week again, and PCGamesN returns to help you cut through the noise, and tune your signal into some of the most intriguing experiments in the indie scene this week, one enticing image at a time. Check out the latest crop below, and check back next week for more. Plus check our our lineup from last week, December 3rd, if you missed it!

By Ishisoft, no due date

It’s not often that I’ll feature a straightforward Mario-like platformer in this column, but Leilani’s Island clearly has the spark of something special about it. That satisfying Donkey Kong-esque roll, the cute enemy designs, adorable protagonist and chill music all add up to something immediately comforting and familiar. It looks like a mash-up of regular Mario and Yoshi’s Island with a dash of Donkey Kong Country for flavour, and I just want to eat it up.

The mark of a good platformer is movement that is inherently enjoyable. Just from looking at the early trailer above, I reckon that Leilani’s Island has nailed it. While there’s no target release date or price-tag, you can follow development either by wishlisting it on Steam, or following the developer on Twitter, where you can see plenty more little snippets of gameplay.

Screams, blood, blade. Still working on test-demo. I did most of the things that I planned, i will try to start tests by end of the month.#mecha #gaming #indiegame #indiedev #madewithunity pic.twitter.com/ltf0NSeiEg

The roughest looking of the games in this roundup, but I am a huge sucker for Armored Core-style mechs, especially in an interestingly asymmetrical combat scenario. In this case, it’s heavily-armed giant robots up against some kind of horrible monster horde – whether it’s mutants, demons or aliens, it’s a problem enough to have the (anonymous, thusfar) developer describe the setting as post-apocalyptic. Just keep the sound off when looking at the clips so far.

You can see a ton more work-in-progress footage on the developer’s Twitter feed, including peeks at an extensive equipment customization system, and a look at the infantry squads that will be supporting your mission. I’ve always found it important to have ground troops or other smaller units in a mech game, to establish scale. I also really like the look of that shoulder-mounted blade arm that just whips wildly across your field of view. It’s a grim, wild, inhuman-looking weapon for an inhuman war, and I can’t wait to hear more info on the game.

By Joymasher, no due date

I was trying to finish a small demo of moonrider for the end of this year but blazing chrome took lot of my free time. Here’s a little preview of stage 1-1
sfx and music by @Dominic_Ninmark #moonrider #screenshotsaturday #joymasher pic.twitter.com/9O3YxXhXfg

We’ve previously featured Joymasher’s other project in this very column – the exciting Contra-like Blazing Chrome – but this tiny studio aren’t content with reviving just one classic formula at a time. Developing in parallel is the equally thrilling looking Moonrider. Anyone who grew up playing the Shinobi games (especially the fantastic Shinobi 3) should be feeling a distinct tingle in their nostalgia gland about now.

While Shinobi is an obvious inspiration, the game takes a few notes from Strider as well, and the lesser-known Hagane to deliver satisfying close combat, high mobility movement and a very flexible dive-kick attack. This exciting looking action game shares a similar aesthetic to Blazing Chrome, though this looks a little more bloody, in a very late 80s/early 90s anime way. The sprite art, music and feeling of movement easily live up to the standards set by its now-generation-old console predecessors. While the developer’s Twitter feed is mostly focused on Blazing Chrome right now, you can find a few extra tantalising morsels of Moonrider in there, too.

As much as I may enjoy collectible card games, I’ve always found that deck-building and card-based tactics work better for me when paired with another gameplay framework, as in the likes of Pox Nora, Card Hunter or even the original dungeon-crawling Magic The Gathering for early Windows systems. In the case of Albedon Wars, it’s a hex-based strategy RPG, with dialogue decisions outside of combat and a world map to explore outside of more direct 1v1 conflicts.

There’s a bit more story to this one than most card games, too. An alien world is invaded, and you get to play both sides of the conflict – four factions from each side battle across the surface. The game is currently seeking alpha testers – as with any competitive card game, balance needs a lot of fine-tuning – so if this all tickles your fancy, there’s a signup page on the official site here. There’s also a few more clips of gameplay on the official Twitter feed for the game, although the still card art here makes this look like a game far better for players than casual spectators.

Okay, for starters I’ve ALWAYS wanted to do that in a helicopter game, but anything light and arcadey enough to pit my human war-machine against massive alien spacecraft tends to frown on gut-wrenching, rotors-towards-ground maneuvers like that. In this arcadey ‘sim-lite’ shooter, you play as one of Earth’s last aerial aces, defending one of the final surviving aircraft carriers from the alien fleet pursuing it around the globe. From the looks of the flight model, it feels convincing enough, but the chunky alien laser blasts and floating powerups combine to make it look a bit like a hybrid of Comanche and Incoming.

Solo dev MuddyPixel (who has extensive AAA studio experience, having worked with DICE, Insominac & Respawn) promises a more sim-like damage model as well, with your helicopter’s health being dependent on each component functioning, rather than a simplified HP pool. You can see plenty more footage over on the developer’s Twitter feed, including a peek at some of the other vehicles you can pilot, including jetfighters. While the game is designed to be played with a VR headset, it will support traditional play on a monitor as well, so nobody will be missing out on this. Personally, this has nudged me just that little bit closer to picking up a Vive of my own at some point.