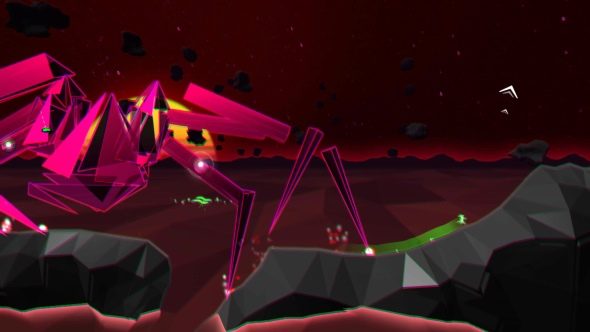 It’s that time of the week again, and PCGamesN returns to help you cut through the noise, and tune your signal into some of the most intriguing experiments in the indie scene this week, one enticing image at a time. Check out the latest crop below, and check back next week for more. Plus check our our lineup from last week, November 12th, if you missed it!

And our award for MAXIMUM SYNTHWAVE AESTHETIC today goes to Rifter, a high-speed platformer about grappling hooks, flying through the air at absurd speeds and feeling like the most badical cool-dude who ever rocked a mullet doing it. The trailer says it all, really – catchy music, great style and more chromatic aberration than you can shake a stick at.

In addition to the raw running and jumping, there’s an interesting focus in fighting some very large enemies by dashing through their weak-points sword-first after a successful flanking grapple. It’s like Attack On Titan’s long-lost vector graphics cousin. There’s a Steam store page up for the game, but no release date or price set at present. This one is Done When It’s Done material, and the developer is currently experimenting with new gameplay mechanics, which you can get a peek at on their twitter feed.

By Transhuman Design, no due date

Carrion is our mystery game of the week. Mysterious enough that the name was only tentatively assigned to it just one day ago. While the structure of the game is still very much a To Be Decided kinda deal, what we’re looking at is some kind of Horrible Amorphous Fleshbeast Simulator. You control a slavering, ever-hungry blob of mouths, eyeballs and tentacles, and you want dinner. You can stretch, squash, and even seperate parts of your ever-expanding biomass to act as traps. Gruesome.

The grungy style may be familiar to some of you – this is from Transhuman Design, creators of Butcher, an especially brutal platform shooter that blended the mouse-aim shooting of Abuse, the twitch action and atmosphere of Quake, and the ever-looming threat of sawblade oblivion of Super Meat Boy. Keep an eye on Carrion by following the developer’s Twitter feed here.

By Reinkout, no due date

Your goal is to singlehandedly foil an alien invasion by running around like a lunatic, commanderring whatever strange vehicles you can get your hands on, and running over a bunch of angry extraterrestrials, while evading their massive missile-spewing UFOs. Plus, if you bring a friend, the entire game is supposedly remixed to accommodate for twice the player-driven idiocy. Always a nice feature.

I’m clearly not the only one that sees greatness in this game. Old British studio-turned-publishers Team 17 have signed the game for release on Steam and a variety of consoles, although to the best of my knowledge there’s been no release date or price tag assigned to this one either. You can check out a lot of newer footage of the game on the developer’s twitter feed here.

You could be excused for not being wildly thrilled by the trailer above, but I’m only using it as a placeholder because the real gem is in this video-Tweet right here. Yeah, the character animation – while well drawn – is a little stiff, but those VHS style effects look and sound amazing, and perfectly suit the 90s cartoon apocalypse vibe of the game.

It reminds me a lot of Klei’s Shank series, although with more of an open-world, scavenging-and-crafting angle. Plus, it’s just a teensy bit furrier. You can see a little more of the game in action on the official site, and pick an early build up (effectively a demo, if the store text is accurate) on Steam here for $10, while you wait for a full (and somewhat more expensive) release. The full game even promises some point-and-click adventuring on top of the action, so it should make for an exciting blend of elements.

By Bullish Games, but no due date

It’s Thief, but in 2D. Really, that’s all you need to know. Look at the trailer above, go check out the official site, and then peruse the developer’s twitter feed. This is every element of Looking Glass’ genre-defining sneakyboi simulator, boiled down to its purest element and wrapped in charmingly chunky pixels.

It’s not all Thief – there’s some roguey-type-ish elements here, with your thief being a single expendable member of the guild, and liable to be replaced by a randomly generated rival if you manage to get yourself caught or killed. Missions and their goals will be at least partially generated as well, but the general vibe and aesthetic of this game… well, I know I’ll be disappointed if nobody gets called a Taffer in this one.