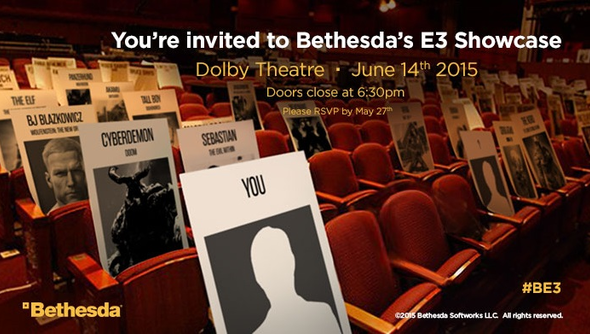 Bethesda’s sent out invites for its E3 showcase, it teases news for Dishonored, Doom, and Wolfenstein but anything for Fallout is conspicuously absent.

Around the PCGamesN cave we’ve all been gearing ourselves up for a Fallout 4 announcement, this invitation’s making me a little anxious.

Bethesda’s showcase is scheduled for 14 June, the Sunday capping off E3. The invitations the publisher sent out to the press shows seat reservations for characters from some of their biggest games sat in the audience. There’s Wolfenstein’s BJ Blazcovicz, Doom’s Cyberdemon, even a tallboy from Dishonored. Unfortunately there’s no sign of Fallout’s Vault Boy.

That’s far from a confirmation that Bethesda won’t be revealing a sequel, they likely wouldn’t want to spill the beans for their biggest surprise in a press invitation, but there’s not even a slight tease of a reveal.

Until 14 June we’ll just have to keep our fingers crossed.