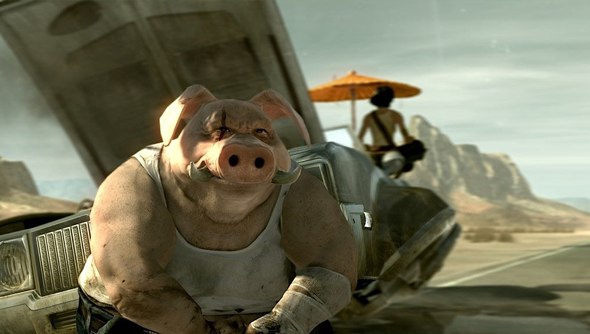 Ubisoft have posted a picture of Beyond Good & Evil’s Pey’J to their Facebook page along with the message “We’re a bit busy prepping for E3. Time to call in some reinforcements.” Strongly suggesting that we’ll finally hear something about the sequel to fantastic action game from Rayman creator Michel Ancel.

Of course, it could be a Ubi employee having a bit of fun with the community. If that’s the case we need to track down this comedian and make sure they’re the first against the wall when the revolution comes.

It’s been a long time since the original game’s release back in 2003, and in the interim we’ve had very little to go on. A concept video, a couple of images, and word that the game’s development was being delayed so Ancel could focus on Rayman: Legends. Oh, and this teaser video from back in 2008:

With work on Legends now wrapping up prior to its release it would make sense that Ancel’s time is becoming freer, allowing him to return to work on Beyond Good & Evil 2. Hopefully we’ll know more by the end this time next week.