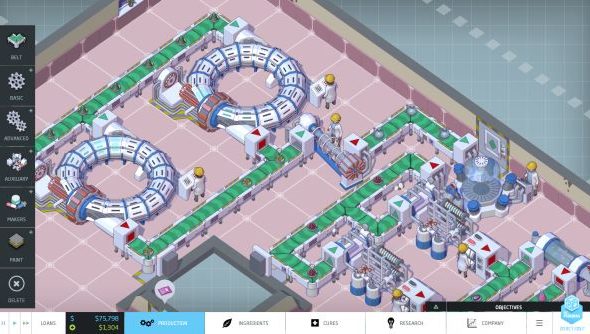 Fun first paragraph fact: there was a period of time where every thread on the official Star Citizen forums would descend into hate-filled rage arguments about the nature of big pharma (the concept, rather than this fine management video game) and whether it was evil. It made it quite difficult to discuss things there. While the pure spitting bile of those conversations haven’t carried across, the debate as to where the line on profitising medicine is the core of Big Pharma’s play.

It’s about building a factory to create medicines for various illnesses. There’s a lot of options within that, like creating placebos to finance yourself, or not curing certain diseases because the R&D time isn’t worth it. From what I’ve read and heard, it’s very blunt with these options. It doesn’t judge you or push you one way or the other, it simply presents you with the facts and allows you to make up your own mind. That is a political statement in itself, of course, but a bit more interesting than the alternatives.

The two main pillars are managing your money and solving the complex layout puzzle of trying to get the most efficient work out of your space and employees as possible. With the added moral layer and a dose of randomness from the different scenarios that can come up, it’s an interesting mix. Reactions to the long-running beta have been positive as far as I’ve seen, as are the majority of Steam reviews.Bit cheaper over on GOG than Steam, if you’re interested.