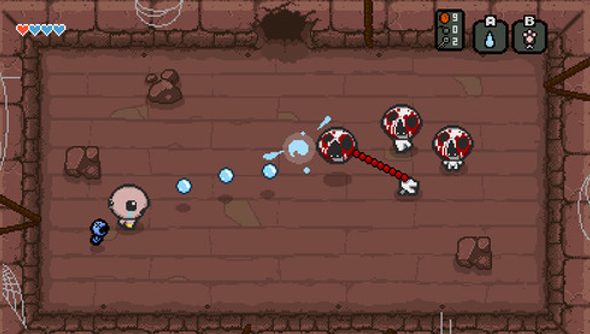 McMillen and co. are nearly done transplanting The Binding of Isaac from its restrictive Flash trappings to a new engine. Somewhere between A and B, the gorecore Zelda-like has picked up 16-bit graphics and local co-op.

Let Edmund and Danielle McMillen lead you through several of its dank and, frankly, disgusting rooms.

The Binding of Isaac: Rebirth co-op sees Player 1 offers up one of their hearts to a friend, who plays as a randomly-assigned floating baby with unpredictable skills and stats.

In this short demo, the McMillens pick one of Rebirth’s 19 new challenges, and Ed spawns in as the troll baby: a bobbing grey foetus with a shit-eating grin and an ability to drop bombs, but not choose where they land.

Of course, Rebirth’s maps are procedurally-generated, and the pair only stumble across a handful of its new features.

“Sucks that we didn’t see any big rooms or new enemies,” notes Ed. “Sucks for you.”

But we have learned that new analogue stick controls allow for sassy slow-walking, and dark grey tears cause concussive damage, like they do IRL. Worth a second purchase?