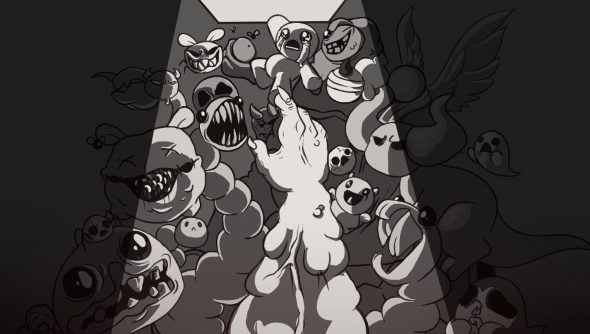 Not a happy day in the world of naked, crying, basement-dwelling children as prolific Binding of Isaac mod crew Team Alpha (creators of the Alphabirth trilogy of content packs) have said their official goodbyes to the community after the release of their third pack. Rather than slip quietly into the night, they’ve detailed their woes and frustrations with the Binding of Isaac publishers/devs Nicalis and the official Afterbirth+ mod API in an extensive blog post.

Sad news, but there’s life after Isaac – here are some of the PC’s best indie games.

While a lot of good has come from the release of the Afterbirth+ expansion for the game (the Steam Workshop for the game is well stocked with new content), more advanced modders were left in the lurch. According to Team Alpha, core features of the official API remained inaccessible, buggy, or otherwise flawed, necessitating the creation of their own middleware API extensions, which are a prerequisite to download if you plan on using their mods.

Team Alpha also have some harsh words for how Nicalis handled the release of the Afterbirth+ expansion, with the initial release seeming both threadbare in terms of content and frequently buggy. While the worst of the issues were fixed over time, Team Alpha feel that Afterbirth+ never should have been pushed out to market in that state, and the mod API should have been developed with more involvement and consultation with the existing mod scene.

While one major mod team has said their goodbyes, it’s not all doom and gloom for Isaac fans. Massive total conversion mod Binding of Isaac: Antibirth seems to be alive and kicking with unholy vigor, with a major new update in the works, as announced a couple weeks ago. It should be noted that Antibirth predates the Afterbirth+ expansion and any official mod API, and was built on top of community efforts to reverse-engineer the regular BoI Antibirth engine. Sometimes, it seems, you’ve just got to do it yourself.