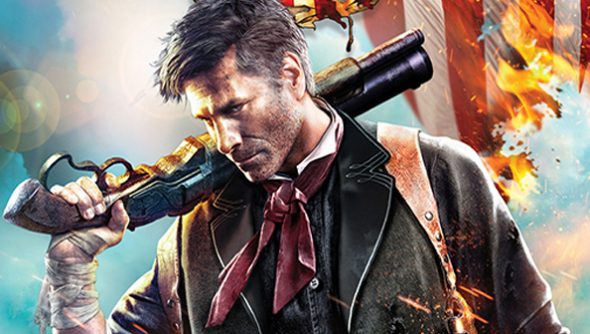 I’ll let you down gently – BioShock Infinite’s cover art is disappointingly finite. There’s a thing you can do quite simply with two mirrors, and Irrational are going to kick themselves when they discover it.

There’s only one mirror image in Infinite’s box art – protagonist Booker DeWitt, turn-of-the-century Eastwood and intended better version of you. He’s on the front. On the back is Elizabeth, De Witt’s motive for hurling himself through the skies. She’s looking a little different to last time. Again.

Anna Moleva is a Moscow cosplayer. So impressed was Ken Levine by her likeness to their own Elizabeth that Irrational have hired her for a series of promotional appearances, beginning here: “We were so amazed by her dedication and her resemblance to Elizabeth that we decided to ask her if she’d like to be involved in helping bring Elizabeth to life in our box, our key art and our upcoming television ad,” said Levine in a blog post.

Meanwhile the stars and stripes burn, contorting in the wind. This is a game about America, and Irrational would like everyone to know it.

2013 is Infinite’s year. Are you looking forward to it?