Stripping out the story and living world of Bioshock Infinite is the biggest favour Irrational could do its combat mechanics, Bioshock Infinite: Clash in the Clouds puts them in the spotlight.

Separated from the main game, the four-map DLC is Irrational’s take on horde mode: the maps are mini arenas, cobbled together from familiar Columbia locations, where you battle through waves of enemies, earning money to spend on upgrades and renovating your new hub point, The Columbian Archeological Society.

At the core of Clash in the Clouds are the ribbons, earned by completing specific challenges attached to each of the 15 waves. Achieve it and you get a bit of bonus cash and a blue ribbon pinned to the level’s portrait in the Archeological Society (immediately inciting the collector in all of us: any missing ribbons stick out like Comstock in a Vox tavern). The challenges range in difficulty across the arenas. The first level, Ops Zeal, a small industrial level shot through with skylines, has you kill enemies using only skyline strikes. By the last level, Emporia Arcade, based on the ransacked upper class district you fight through in Infinite’s end game, the challenges become particularly fiddly, float an enemy with the bucking bronco vigor and have them killed by a possessed patriot. Not simple. 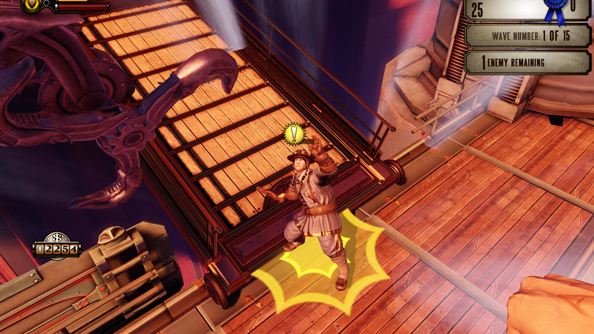 These ribbons are a canny idea. For all Irrational’s talk of varied combat prior to the release of Infinite, I fought through the game largely sticking to my guns (namely, the hand cannon and carbine) and largely ignoring the vigors. I managed fine. There felt like no real need to explore other ways of fighting because the shooting felt like filler between the story events. The ribbons encourage you to fight in ways that aren’t efficient but are inventive.

They also keep the arenas fresh. The four maps are not large and you’ll soon know your way about them but the ribbons cause you to approach the same space repeatedly focusing on different parts of the environment. If you have to kill using just the skylines then that is where your attention falls; with just scoped weapons, then you look for sniper spots; with the shotgun, now it’s all about closing distance quickly. As the challenges become more intricate you need to begin planning how you approach the space; seeing how you can have a soldier move close enough to a patriot to have the one in range of the other when you possess it. 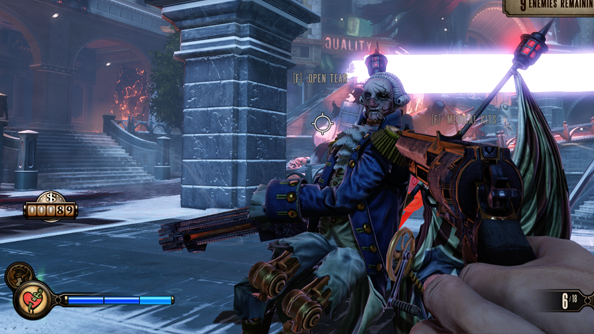 But ribbons don’t solve the problems inherent in the combat. Many of the enemies remain bullet soaks – particularly the handymen. And, a lot of the guns are largely interchangeable. They have you changing your weapon and vigor loadout frequently enough that you won’t notice it so easily but this is still the same lacklustre combat from Infinite.

Separate from the arenas is The Archeological Society. It forms the hub for the four arenas but also acts as a money suck for the cash you earn in the challenges. You begin with an empty hall and only one arena unlocked. With the cash you can buy the other levels and relics to fill the society’s display room; concept art to adorn the walls, posed character models to stand on the empty pedestals, and, best of all, recordings of the game’s anachronistic soundtrack. (Hidden throughout Columbia were cover versions of songs which had no place in a 20th century floating city. They were the game’s finest touch.) Once you’ve filled the hall it’s quite the sight, at the centre you can purchase a statue of Songbird, Elizabeth’s predator/protector, to stand mightily over your collected works. 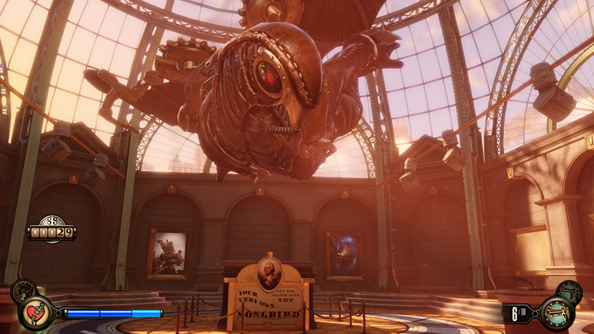 It would be easy to dismiss Clash in the Clouds as an oddball release. It is an oddball release: while its recognisable architecture places it in the same world as Infinite, its Bulletstorm-esque emphasis on creative combat and complete lack of story makes it decidedly unlike its parent game. The next two DLCs due from Irrational, Burial at Sea parts 1 & 2, which are story-based seem more in style with Infinite, even though set in Rapture instead of Columbia. Despite this; no, because of this it’s actually something a little bit great. Burial at Sea will probably be a compelling world, as much so as Columbia was in Infinite, but I will rush through its combat, paying little heed to my weapons and skills. Clash in the Clouds, for the few short hours it took me to see its challenges and levels, had me focus on its mechanics and care about what I was doing not what I was seeing. Infinite’s designers will have spent years working on the combat in Infinite. If it weren’t for this DLC I wouldn’t have paid much attention to it.