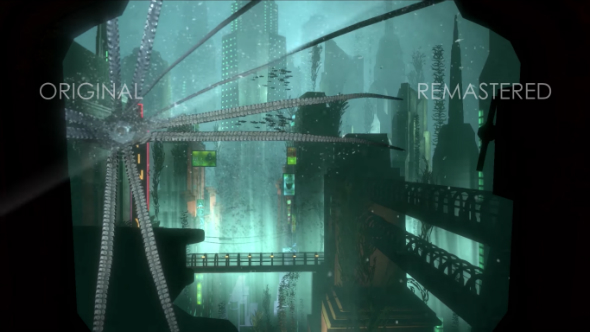 I went back to Bioshock quite recently, and was struck by how well its Unreal 2-powered visuals hold up to modern scrutiny. But did 2K listen? Not in the slightest. They decided to go and make the seminal neoliberalism-flavoured FPS look even better with a remastered edition, making an absolute mockery of my asinine observation. Anyway, here’s a trailer that shows exactly how much better it looks.

Gosh, they’re doing a serious makeover with this one, aren’t they? It’s not just that the texture resolutions are a bit higher. The lighting and shading are all streets ahead of what 2007 could offer, and that leads to more clarity and depth in the scenes 2K are showing off so far.

It’s nice to see they haven’t gone overboard with the effects of today though. No obnoxious colour saturation or bloom. No vomit-inducing motion blur (as far as I can see, at least).

Bioshock: The Collection is coming to PC September 16, bringing a prettier Bioshock 2 with it in addition to the gussied-up original. Since Infinite wasn’t that long ago and still looks great on PC, that isn’t getting the same level of remasterization (TM), but if you’re a fan of the deep sea prequels this’ll still be fun times.