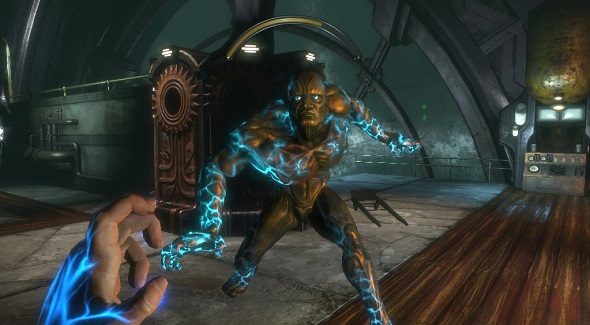 Last night, on September 18, the Jewish festival of Yom Kippur began. It’ll run until this evening, marked by prayer, fasting, and synagogue services. Yom Kippur is the holiest day of the year in Judaism, a day of atonement for past sins during which each person’s fate for the upcoming year is sealed.

So it should come to no surprise that this is a day on which the Jewish community would apologize for the failings of their past, and seek forgiveness from those they have wronged. It might, however, come as more of a surprise that the director of Bioshock would be one of those piping up to admit their sins.

Last night Ken Levine, who worked as the director on Bioshock and Bioshock Infinite, took to Twitter to atone for the mistakes of his past. Or rather, more specifically, he was apologising for one mistake in particular – the climactic boss battle at the end of that first game, against a somewhat monstrous version of one of the game’s central characters.

In the tweet, which you can see below, Levine says “today is the Jewish day of atonement, it seems. So I’m here to apologize for the naked Atlas boss battle at the end of BioShock.”

Today is the Jewish day of atonement, it seems. So I'm here to apologize for the naked Atlas boss battle at the end of BioShock. pic.twitter.com/UeaEWV717Q

Whether Levine is apologising for the mechanical failures of the boss fight, the effect it has on the game’s narrative, or that enormous naked metal man, is a matter of personal interpretation. In my opinion, it’s the latter, because coming across that tweet this morning has been alarming.