Editor’s note: the following is the first in a series of guest articles from the esteemed James Verbalist, inane games journalist, in which he selects unsung treasures of our format. The following post contains spoilers for BioShock, Fight Club, The Sixth Sense, The Usual Suspects, and Se7en.

2007 was such a vintage year in PC gaming that it’s entirely possible you missed its biggest treat and most unsung hero. If you’d stepped into a videogame store that year, you’d have at once been greeted by now iconic titles like Shadowgrounds Survivor, Viva Pinata, The Sims 2: Bon Voyage expansion, Aquaria and RACE 07: Official WTCC Game. We’ve all read plenty of over-wrought, navel-gazing critiques about each of the aforementioned games, but today I want to talk about an ambitious first-person shooter from 2K Boston released that same year.

Looking for more recommendations? Try the PC’s best games, like, ever.

The few people who played BioShock at the time often wax lyrical about its badass array of weaponry; an arsenal of shotguns, machine guns, chemical throwers and grenade launchers to rival even Doom’s. Prod them further for deeper analysis of the game’s qualities, and they’ll often move towards BioShock’s high levels of visual fidelity: ‘mental water effects’, they’ll say. And ‘Brilliant graphics.’ 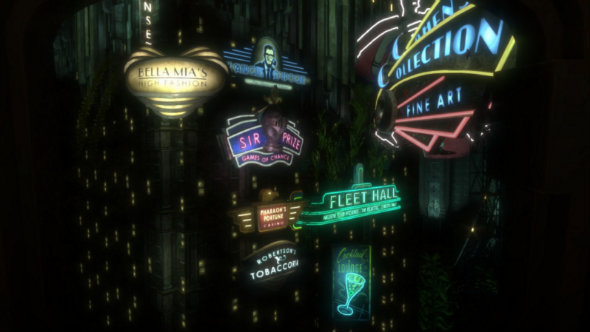 But I think they’re missing the point. Step inside an intellectual bathysphere and delve deep below the surface of BioShock, deep as its underwater city Columbia Bioshock City Rapture lies beneath the waves, and you’ll be rewarded with a story that tackles 20th century objectivism, Ayn Rand, individualism, laissez-faire capitalism, the works of Ayn Rand, free will vs determinism, and Atlas Shrugged.

It’s a critical discourse of 20th century societal ideals, expressed as a visceral, rollicking first-person shooter. Often the references and influences are implemented with such subtlety that they pass by unnoticed though, so let’s slow it down and analyse Ken Levine’s underwater adventure rivet by rivet.

Take the game’s dramatic meeting with Rapture’s founder Andrew Ryan by way of an example of its intellectual clout. We all remember that scene for the fantastic melee weapon feedback and effective dynamic shadow effects, but take a closer look:

Well, there’s more to this scene than it seems. What Ryan is essentially conveying is that free will is ultimately more important than anything. Everyone lives; everyone dies. Few get to do so on their own terms. So when he says ‘A man chooses, a slave obeys’ while you’re literally dismantling his face, he’s asserting dominance over you. You are the slave, because you’re obeying his commands. Ryan is the ‘man’. He’s determining his own future, on his own terms. A man chooses, a slave obeys.

It’s a clever piece of writing, if a bit subtle, and it also ties in with the overarching ideas of Ryan’s subterranean city. Rapture is a place for the intellectual elite to express themselves without any government regulation to hold them down; somewhere to focus one’s energy and talent on artistic or scientific progress without bureaucratic, or indeed ethical, constraints. In many ways it’s a callback to Ayn Rand’s objectivist philosophies. 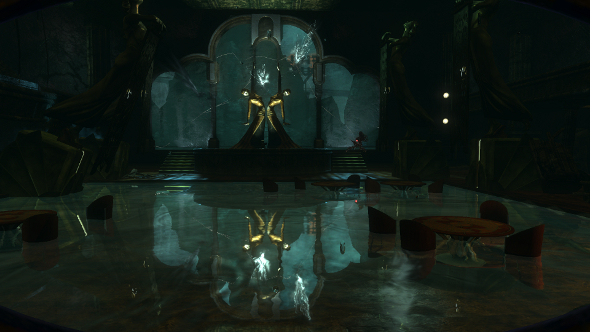 I don’t know if you’re familiar with Ayn Rand, but I am so let me tell you about her. Off the top of my head, Ayn Rand (/ˈaɪn ˈrænd/;[1] born Alisa Zinov’yevna Rosenbaum, Russian: Али́са Зино́вьевна Розенба́ум; February 2 [O.S. January 20] 1905 – March 6, 1982) was a Russian-American novelist, philosopher,[2] playwright, and screenwriter. She is known for her two best-selling novels, The Fountainhead and Atlas Shrugged, and for developing a philosophical system she called Objectivism. Educated in Russia, she moved to the United States in 1926. She had a play produced on Broadway in 1935–1936. After two early novels that were initially unsuccessful in America, she achieved fame with her 1943 novel, The Fountainhead. Those are the basics, anyway. I’d have to look the rest up online somewhere.

Essentially the objectivist principles that Rand laid out posited that the pursuit of individual fulfilment above should be placed above all else in society. Take a look back at Rapture, and you’ll see that it’s a physical manifestation of this idea taken to its extreme. I’m amazed that no-one has drawn those parallels between Ken Levine’s game and works like Atlas Shrugged before, but it’s clear as day once you make the connection, isn’t it?

But there’s more to it even than that. Next we’ll examine the ‘Would you kindly’ motif. At first you think it’s just your mate Atlas (coincidence? Read on…) being a bit facetious with you. ‘Would you kindly open that door’ he says, making a little joke about manners in a survival situation, the cad. Then you go on thinking that for the duration of the game until its completion, and continue in that same mindset for a decade… until reading this article. Because there’s a revelation hidden within those words. Ready for this? Atlas was controlling you with that phrase. 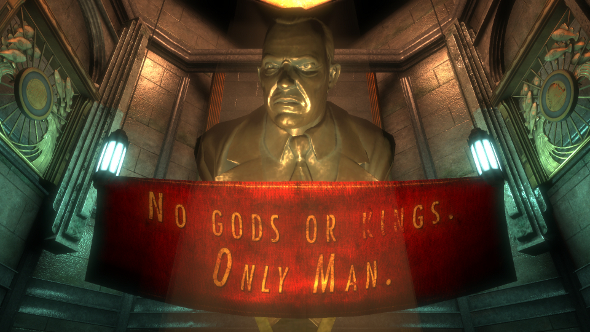 The clues were there. If you look back at that Andrew Ryan scene above, you’ll find the briefest 15-second hint that there was more to that phrase than friendly chatter. If you go back and carefully analyse the frames while listening to the audio track, you’ll decipher that Atlas used that exact phrase at key moments just before you did important things in the story. You’ll see black-and-white flashbacks similar to those used in movies when characters discover that Tyler Durden isn’t real, Bruce Willis is dead, Keyzer Soze is Verbal Kint, and Brad Pitt’s wife’s head is in the box. They discover it by suddenly recalling all the times other people told them as much at prior occasions, just as you’re doing now. Atlas was making you do things. Things that ultimately benefited him while you were merely fulfilling your pre-determined role as a small cog in a big art deco machine.

That’s the amazing thing about BioShock. Not the guns, which are nonetheless absolutely rocking, but the brains. Bioshock harnessed the ideas of novels such as Orwell’s 1984, Huxley’s Brave New World, Rand’s Atlas Shrugged and Lem’s Eden, in a way that’s inarguably better than all of them. Orwell’s oeuvre is now hopelessly redundant in the wake of Levine’s. And to think so much of BioShock’s quality lies so unexamined, so overlooked by the games media. It’s a crying shame, but I’m glad I’ve been able to guide you along this intellectual journey today and examine one of 2007’s finest – possibly even the finest – of PC action games.

In his next column, James will patiently explain that Dark Souls isn’t even hard, and that most people who say they like it don’t even get it.