Call of Duty: Black Ops 4 will be the first game in the series to launch without a traditional single-player campaign, putting the focus on Black Ops 4’s multiplayer modes. It makes sense given the huge number of Call of Duty fans that play the series just for the online competition, but the question is whether this shift will make for any improvements? Especially, that is, in a world dominated by battle royale.

The first thing to notice when jumping into the open beta for Black Ops 4 is the new health system. Call of Duty was once the quintessential ‘twitch’ shooter but, over the years, Treyarch has been slowly moving away from that. Black Ops 4 is without a doubt the biggest leap in these terms: there’s a significant increase in the time to kill, and each player now has a health bar hovering over their head – before, you could kill people so quickly that such a visual indicator was pointless.

Regenerating health has been axed, too, but you can now replenish your health with a press of the X key, using a Stim Pack. There’s no limit to how many times you can heal but it takes valuable seconds, in which time you’re not able to shoot. You can heal while sprinting, however, allowing you to fall back and regroup.

Managing your health along with each character’s unique abilities, which both operate on cooldowns, adds another layer to the tactical flair of Black Ops 4. Oftentimes I found myself retreating behind my teammates to make sure that, if they started to take damage, I could fall back and save my skin. I’m not saying using your teammates as human shields is a solid strategy for winning games but, hey, it worked for me. On top of this, the maps available in the beta have been designed with each character’s abilities in mind. Tight corners open up opportunities for traps expert Torque to lay barbed wire while the verticality is perfect for Ajax’s zip wire.

But step back from the heat of battle for a sec and you can get the impression that Black Ops 4 is a departure for the series. Rather than being the inventor, this new Call of Duty mixes in elements from shooters that have cribbed parts of the game’s audience over the past decade.

the sweeping changes result in a loss of identity

The new Heist mode is so reminiscent of Payday 2 that I had to regularly remind myself I was playing Call of Duty. Then there’s the new focus on characters, their distinct abilities and how teams are composed, which smacks strongly of Overwatch. While the specialist roster was present in Black Ops 3, here the abilities and ultimates (called Specialist Weaponry) of each character are more essential to the makeup of the team. There are also shades of Counter-Strike: Global Offensive and Rainbow Six Siege to be found – especially in Heist. Accumulating money to buy new gear and weapons at the start of each round is quintessentially Counter-Strike while the increase in environment-based traps bears a striking similarity to Siege. 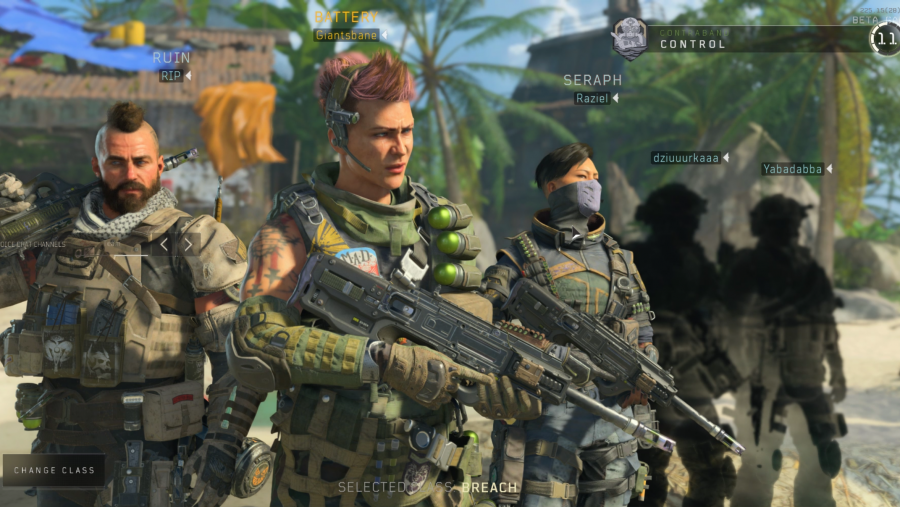 Furthermore, the aesthetics of the Black Ops universe have grown stagnant. Visually, the game looks nearly identical to its predecessor. It’s the same gruff, teched up soldiers of previous games – in some cases literally, as several of the ten playable specialists return from the previous entry in the series. The maps are all standard modern military fare as well. Say what you will about the much-maligned Infinite Warfare, but at least it’s visual design had a clear and distinct personality.

You could generously call this a Greatest Hits compilation that crams together the best elements of modern shooters. But, for me, the sweeping changes result in a loss of identity for the game and, ultimately, create a more generic experience than Call of Duty has ever been. This feeling is compounded by the fact that the fluid parkour mechanics of Black Ops 3 have been removed. My fear is that Black Ops 4 risks losing its audience by trying to be every one of its competitors at once.