We’re in a basement bar in Hamburg, where the clink of mead-filled mugs is occasionally answered by the clang of axes. In the next room, an Anglo-Saxon with a crescent moon of long blonde hair is showing game developers how to grip a medieval weapon with both hands, lift it behind your head, and send it cartwheeling into a shuddering target board. Over the course of the night, as their speech begins to slur, they’ll prove surprisingly good at it.

“The goal was that when someone from the outside is looking at Blackguards screenshots they might not, in the very first steps, think it’s a German game,” he explains. “We thought at the very beginning, ‘It should not be like a typical Dark Eye game’.” It’s not that Daedalic are ashamed of their heritage – they’re simply aware of the gulf between a German market hit and the proper, international successes they’d like to be having. They’re used to the prejudices that guide players’ buying habits – the internal voices that warn them away from games like Daedalic’s in expectation of bugs and staid design.

“The biggest, most successful German developed games are running pretty well here, but outside of Germany it’s really difficult,” Fiebig admits. “It’s something to do with our culture I guess. Maybe it’s more important to be little bit more weird in your brain than [to be] as structured as Germans are.”

They stopped short of pulling their studio name from the splash screens. But when Kai and his team of 20 set out three years ago to make Blackguards, they intended to build a game that wouldn’t stand out as German in a line-up. And to some degree, they succeeded.

At first glance, Blackguards doesn’t look like the RPGs we’re used to getting from Germany. Its loading screens are lavish, full-screen affairs featuring concept art killers in dynamic poses. Its beige world map instantly recalls Baldur’s Gate’s Sword Coast – large swathes of it ominously blank, as if awaiting a flowery, scrawled ‘here be monsters’. The player party’s progress through it is presented as a twirling blue ribbon. The whole production stinks of polish. But nor does Blackguards look quite like the RPGs we get from Canada or California. On the ground, in turn-based combat, its characters are distant figures on a hexagonal grid. In conversation, they’re pretty but uncomplicated. It’s about halfway there. Blackguards looks like a BioWare game might today if Neverwinter Nights were still in vogue.

Perhaps that link shouldn’t be especially surprising. At the end of the ‘90s, Fiebig worked on Baldur’s Gate II – the splayed-open highpoint of BioWare’s Infinity Engine heydey, leaden with consequence, characters and cruelty.

Beyond the aesthetic similarities, Blackguards must be the most dedicated inter-party bickering simulator built since. Daedalic call it a game about “trust and friendships” – in which all of your friends happen to be murderers, traitors and convicted arsonists. A game about player choice, in which past mistakes can lead your party to disregard your opinion entirely. 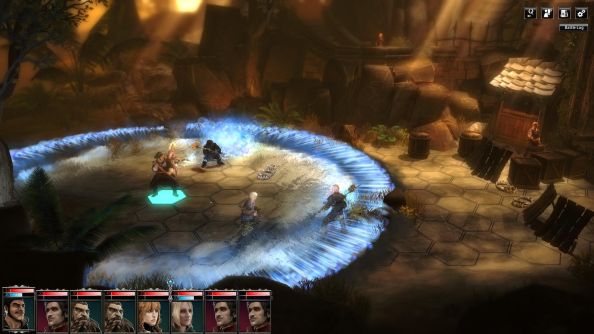 It’s here, perhaps, where the paint begins to chip away and Deadalic’s undeniably German colours show through. Because when Blackguards asks you to make a choice, it’s going to follow through with consequences.

“We made a decision right from the start – we have a game about rogues, and we can’t be wimps,” says Fiebig. “So in the game you need to make hard decisions, you need to be disappointed. You need to be sad at some points, because you’re losing someone or something.

“For example, if you’re playing Final Fantasy VII and you’re losing one of your characters – it’s a shame on one side, but also you get the [idea] that you are not immortal.

He smiles. “We have a lot of decisions that make you feel that you are not immortal.”

This is not the way most game developers think. 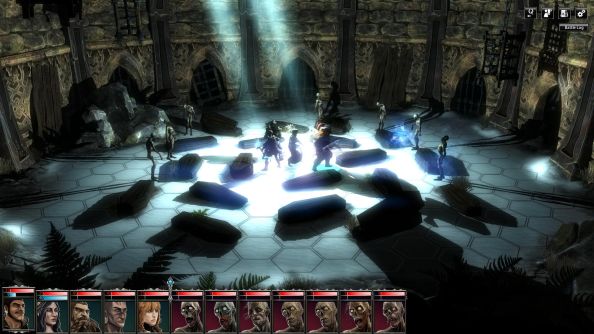 Conventional AAA thinking has it that any work committed to a part of the game that the player is unlikely to ever see is a waste of resources. The rare game that does commit to branching stories and questlines – the work of an Obsidian, say, or a CD Projekt RED – tends to be explicit about which choices yield what consequences.

Blackguards – built by disciples of tabletop RPGs, led by a Baldur’s Gate veteran – is not explicit about this stuff. And that’s confused players of its Steam Early Access version no end. In direct feedback and on forums, Daedalic have seen players complain about Blackguard’s restrictive narrative – unaware that they’ve chosen one path of many through a quest. They’ve watched as early adoptees condemn the game for its difficulty spikes – not realising that a tough combat scenario is the consequence of an earlier decision.

“We learned that they are not used to it,” says Fiebig. “They have the impression that the game is linear, but it’s not. But we kept everything inside of the game, so it’s not obvious. It’s not like other styles of games – you don’t have a screen that’s asking you three times if you are sure you want to make this choice.” 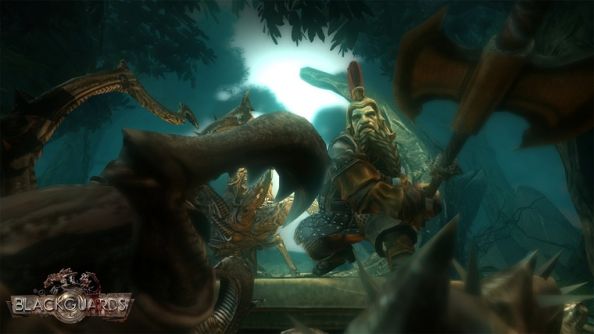 During battles, similarly, Fiebig reckons players are using just 20% of the tools available to them.

In one boss fight we’re shown at Daedalic’s Hamburg HQ, a huge ape can be defeated using a nearby crane system. In several others, fire and swamp gas can be mixed with predictable results. And in so many of the game’s battle maps, barrels and crates can be manipulated to block paths, build fire traps, or even bury enemies for good.

The results, should players ever discover them, will be memorable fights won through creative decisions made in the moment – rather than on the level-up screen. 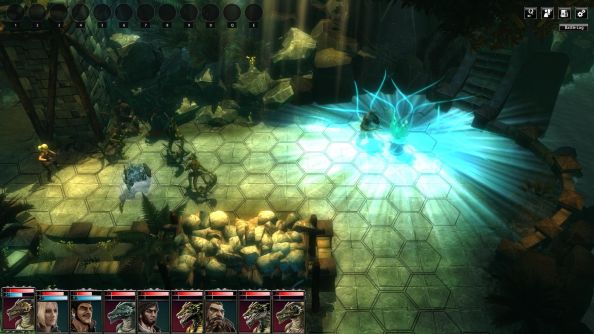 Blackguards’ combat alone is bold and brilliant enough to bring in players. But away from the hexagons, Daedalic are suffering unnecessarily for their tabletop integrity – hiding their hard-wrought branching narrative away, and frustrating players in the process. They need to uncover the cogs, to reveal the complex machine they’ve built. They need to shout louder about the onus they’ve put on player choice, and give players reasons to do the same. Then, and only then, will they stop looking quite so German.

“We don’t want to look German,” says Fiebig. “We won’t [manage that] 100% because some things are so burned into your brain you can’t get it out. But I guess for the next game it’ll work much better because we have more freedom in our brains and we know we can [take] more risk on some things.”

He laughs. “It’s difficult to not be a German, if you are a German.”

Blackguards is due out on Friday January 24. As of today, its entire first chapter is available as a demo on PC and Mac.