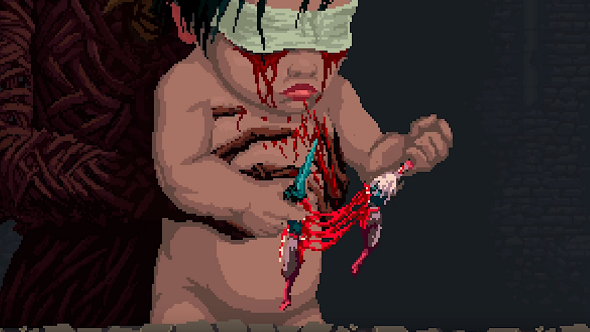 Every now and then an indie game comes along and grabs you by the face – “look at me,” it screams, “I’m magnificent and weird.” Done right, pixel art styles rendered with modern tech just look incredible in motion, and a new Kickstarter game called Blasphemous is among the most striking I’ve ever seen.

Keep an eye on our best indie games list for the standout releases.

“Blasphemous is an action-platformer that combines the fast-paced, skilled combat of a hack-n-slash game with a deep and evocative narrative core, delivered through exploration of a huge universe comprised of non-linear levels,” says the official blurb. “Immerse yourself in a dark fantasy nightmare that has been constructed pixel by pixel by our committed artists.”

The excellent trailer really sells it too, showing brutal platforming, hordes of enemies, a deliberate combat system, and a giant baby doing the old rippy rippy. Have a watch above.