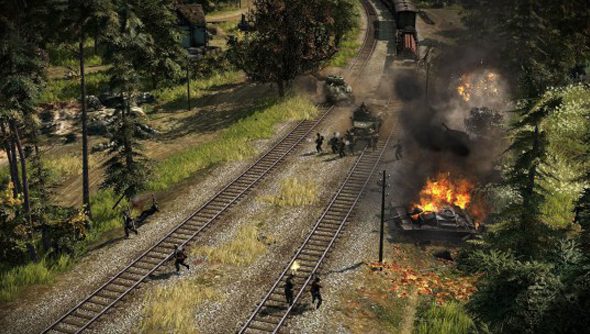 Do you remember Blitzkrieg? It didn’t make our list of the best strategy games on PC, but I remember the screenshots of bird’s-eye-view beach landings in the PC magazines of the early ‘00s. Mentions of the game seemed to linger for years afterward.

We’ve honoured that slow-burn tradition by picking up on Blitzkrieg 3’s fanfare a few day’s late, but with undiminished enthusiasm. The sequel comes from steadfast series originators Nival, and promises to repaint the familiar fights of World War II without the broad strokes of “politics or ideology”.

The new RTS will focus only on the battles that “ultimately shaped the world we live in today”. Single player campaigns will be “interactive stories”, tackling the perspectives of the USSR, Axis and Allies.

Multiplayer will be asynchronous, somehow, allowing players to meander through enemy defences without needing to sit at the PC for hours of downtime. That feature comes to us courtesy of Nival’s nostalgic, and rather sweet, worldview.

“We feel that today’s rather rapid pace of life has caused the RTS genre to fall by the wayside,” said CEO Sergey Orlovskiy. “Blitzkrieg 3 is designed to re-invent RTS for modern gamers, using all of our experience to deliver something new and exciting.”

You might remember Nival for the bold, brash XCOM-alike Silent Storm, or as brief custodians of the Heroes of Might & Magic series. Most recently they’ve devoted their energies to a curious, castle-building MOBA named Prime World.

Throughout their 17 year history they’ve tried to blend strategy with “other elements to create new game experiences”, so expect some of that in Blitzkri3g. Sorry.

There’s a Blitzkrieg 3 beta to sign up for. Did you play either of its predecessors?