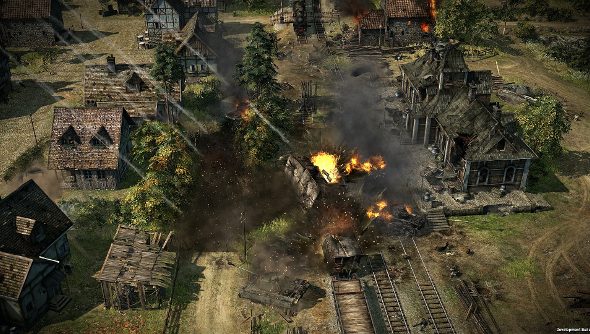 Of all the kriegs, blitz is probably my favourite. It’s got a certain pazazz about it, the old blitzkrieg. The way those highly mobile arm of infantry and armour employ aggressive pincer and spearhead formations to continually charge and overcome a heavily defended front, scattering forces and allowing them no time to respond or reform. It’s really good, that. A spicy bit of tactics, the old blitzkrieg.

Blitzkrieg 3 is an old school tactical RTS from developer Nival with an interesting multiplayer twist that involves building a base and populating it with AI units for other players to attack while you’re off doing something else in real life.

Some background on that developer in case they fell off your radar after releasing Blitzkrieg 2 in 2004, which is now, scarily, over ten years ago.

They’re called Nival, they’re based around Moscow and St. Petersburg, and they’ve been developing games for 18 years, most relevantly the Blitzkrieg games from a decade hence, games that shifted over two million copies in their lifetime.

More recently they’ve been working with Ubisoft on Heroes of Might and Magic, as well as mobile game Etherlords. 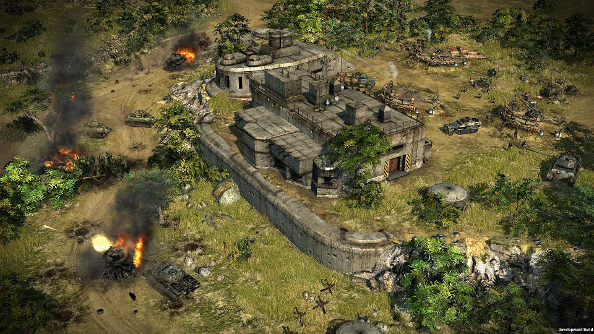 Early Access has allowed Nival to laser-focus a modern day Blitzkrieg sequel at a core fanbase of players who never really went away. So Blitzkrieg 3 is a return to “pure RTS”, a stripping away of some of the more cumbersome modern mechanics to reveal a game that could’ve been plucked from the early 2000s.

The campaigns are each based on real blitzkriegs too, in case you were worried they’d just pulled a cool sounding war-word out of their war-bums. The Soviets will have to deal with the storming of Berlin. The Allies are preoccupied with the Sicily Campaign, while the Axis are taking over France and blitzing through Paris. 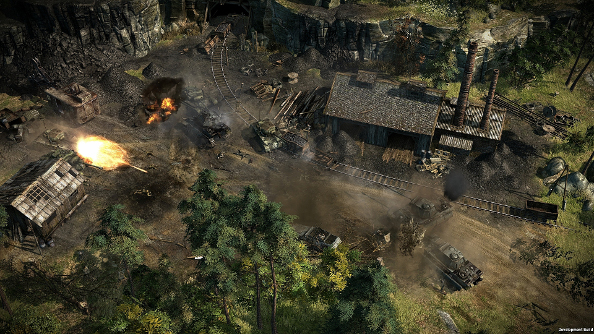 The battles themselves are lovely things, with destructible trees and buildings crumbling and tumbling under tank tracks. Scout units can nip around the map to uncover the fog of war, while infantry and duck through forests and take refuge in empty buildings. It’s tricky and I suck at it, so it must be a halfway realistic strategy game.

You can’t, for example, select all of your units and roll across the map like a big idiot. Instead you’re calling in mortar and howitzer support to destroy embedded enemies, tank traps and minefields, before carefully moving your units in and avoiding ambushes. I watched one of the developers play a campaign mission: it looks frantic and challenging, even for the folks who made the thing.

All of these single player tactics transpose perfectly into Blitzkrieg 3’s clever, asynchronous multiplayer mode. It’s this online component that makes the RTS so compelling, as it asks you to build an AI base that can withstand an attack from another player. The thinking, say Nival, is that players can rarely find the time to co-ordinate simultaneously sitting in front of their computers for up to hours at a time. Instead, Blitzkrieg 3 lets you design a mission to challenge opponents regardless of whether or not you’re around. 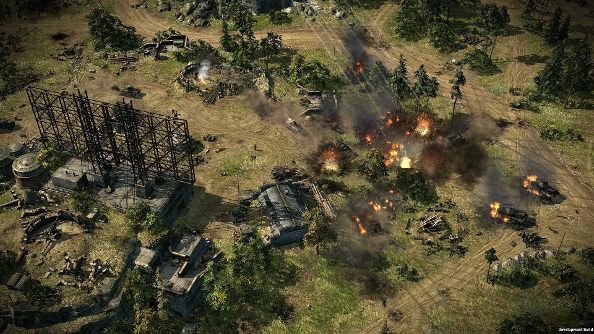 It’s a bit like Ubisoft’s The Mighty Quest For Epic Loot, a game in which you’d construct a Diablo-style dungeon of traps and monsters before real players would attempt to storm it and raid your treasure room.

Just as with that game, you can watch replays of your defences being tested. You can even play “selfie multiplayer”, a mode in which you play against the AI units and buildings you just laid out.

As you play and level up you’ll unlock more units to use in your missions, progressing through a number of levels that permit you to build on ever larger maps and even bigger armies. The number of available units ends up being somewhere in the several hundreds, Nival promises.

And well, rather importantly, this multiplayer mode is entirely free to play. The single player campaigns will be paid-for, as will any further DLC packs Nival release in future, but the online stuff is all open for anybody to try out. We’re promised there’ll be no microtransactions, though a special Premium Account will be available for those with “less time to play”, which suggests some sort of XP or resource multipliers for those who want to pay to progress more quickly.

Whether that’s worth it depends a little on how Blitzkrieg 3’s innovative multiplayer mode of asynchronous krieging is supported. Leaderboards and clans are all planned for inclusion, and you’d assume Nival would lean on Steam to help players find interesting and highly rated missions and opponents. The basic strategy game here is robust enough a foundation to start from, at least.

Blitzkrieg 3 should enter alpha in mid-February and then arrive on Early Access some time after that in 2015.